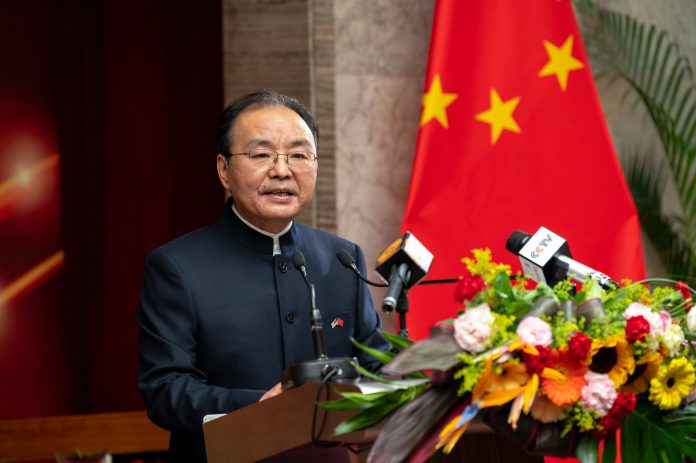 KUALA LUMPUR, Sept 28 — China would like to work together with Malaysia to practice true multilateralism, to uphold international fairness and justice, and in bringing China-Malaysia relationship into a more glorious chapter, China’s Ambassador to Malaysia Ouyang Yujing said.

He said China also stands ready to make great efforts with Malaysia to promote high-quality Belt and Road Initiative (BRI) development as well as to further advance the bilateral cooperation in various fields including vaccine, trade, investment, culture, tourism and education, while tapping into potential for cooperation in emerging fields like digital economy, e-commerce, high-tech and cyber-security.

“Although the pandemic is still going on the rampage, I believe that no difficulties can stop our steps forward. As long as our two countries stick to solidarity and focus on cooperation, we will indeed defeat the pandemic and embrace a bright future.

“I also have a strong faith that with our joint efforts, China and Malaysia friendship shall make steady growth and scale new heights,” he said in his speech at a reception to commemorate the 72nd Anniversary of the Founding of the People’s Republic of China, held virtually on Tuesday.

Ouyang said Malaysia and China’s friendship have stood the test of time, and since the establishment of diplomatic relations, both countries have enjoyed increasing political mutual trust, steady progress in bilateral cooperation, deepening cultural exchanges between both sides, and more and more strengthened friendship between the two peoples.

He said that soon after Malaysia’s Prime Minister Datuk Seri Ismail Sabri Yaakob’s inauguration, Chinese Premier Li Keqiang had sent his message of congratulation in the first place, adding that the close communications and interactions between leaderships will set direction for development of China and Malaysia relationships.

“Facing this once-in-a-century pandemic, our two governments and peoples have joined hands to fight the virus and get through these tough times. This is a vivid example of our special bond; like a Malay saying goes, Bukit Sama Didaki, Lurah Sama Dituruni,” he said.

“Both of our two countries are walking shoulder to shoulder on the journey towards economic recovery and national prosperity,” he said.

In Malaysia’s fight against the COVID-19 pandemic, Ouyang noted that to date, 36 million doses of Chinese vaccine – Sinovac, CanSino and Sinopharm – had been delivered to Malaysia to be used in the National COVID-19 Immunisation Programme.

He added that a new batch of vaccines donated by the Chinese government is also expected to arrive in Malaysia soon.

In terms of trade and economic relations, the ambassador said that in the first half of this year, total amount of Malaysia-China bilateral trade had reached US$81.79 billion, growing 43.9 per cent year-on-year.

He said Chinese non-financial direct investment to Malaysia has come to US$800 million dollars – a rise of 76.3 percent year-on-year.

Meanwhile, Saifuddin in his speech said Malaysia is happy to see the development of China, especially in its economic sector.

He also commended President Xi Jinping on his dynamic leadership, adding that under Xi’s leadership, the country had demonstrated remarkable economic resilience and development as well as positive growth outlook at the world level.

On the bilateral ties, Saifuddin said Malaysia-China relations have grown even stronger since the outbreak of the COVID-19 as both had come forward to aid each other in the fight against the pandemic.

China is also largest investor in Malaysia for five consecutive years in term of approved investments, he added.

Saifuddin had also reiterated Malaysia’s willingness to work with China in realising the BRI.

Number of Australians with diabetes triples in 20 years: Report