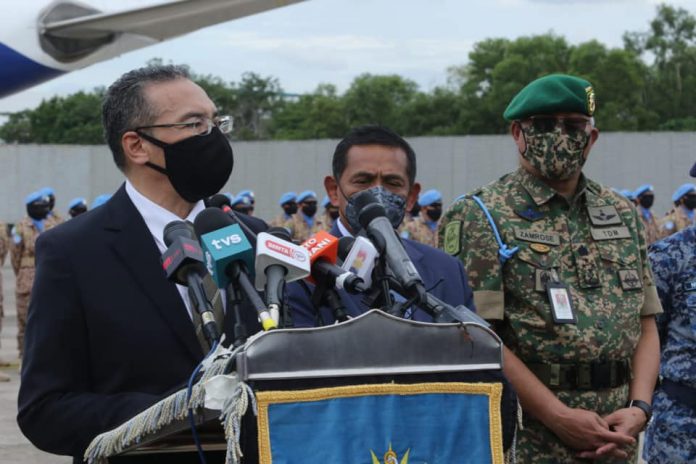 PETALING JAYA, Sept 30 — The first batch from the Malaysian Battalion 850-9 (Malbatt 850-9) team has made Malaysian Armed Forces (MAF) history for having the most number of women personnel since the MAF’s involvement in the United Nations Interim Force in Lebanon (UNIFIL) mission.

Senior Defence Minister Datuk Seri Hishammuddin Tun Hussein said Malbatt 850-9 was unique in that it comprised 11 women officers and 75 others of various ranks (LLP) out of a total of 854 personnel.

Besides that, he said they are being sent on a one-year mission in contrast to a six-month rotation previously.

“This not only underscores the calibre and credibility of MAF women peacekeepers but it is in line with the current needs of UNIFIL for the involvement of more women personnel in community peace-keeping.

“I am also impressed that for the first time, Malbatt is accompanied by a female civil servant from the Finance Division of the Ministry of Defence, namely Farah Zamirah Farush Khan,” he said.

He made the remarks at a media conference after attending the Wearing of the United Nations Beret ceremony, the handing over of the Malaysian flag and the deployment of the Malbatt 850-9 first batch to Lebanon at the RMAF Subang Air Base near here today.

Meanwhile, Hishammuddin said Malbatt 850-9 will be based at the Ma’rakah Camp and Tibnin Camp for UNIFIL duty in Lebanon.

“This year, Malbatt 850-9 will again be accompanied by 30 personnel from the Royal Brunei Armed Forces within the framework of long-standing Malaysia-Brunei defence ties,” he added.

Hishammuddin said the deployment of Malbatt 850-9 will be synchronised in stages beginning today to replace Malbatt 850-8, which ends a 12-month operation on Nov 13.

All districts in Kelantan under MCO until April 29