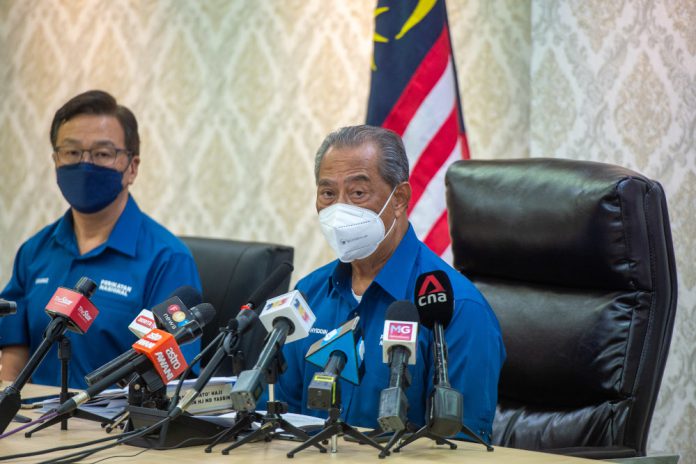 KUALA LUMPUR, Sept 30 – Perikatan Nasional (PN) component parties have arrived at a consensus to settle the allocation of seats to be contested at parliamentary and state levels in the 15th general election (GE-15).

PN chairman, Tan Sri Muhyiddin Yassin said PN would continue negotiations on the distribution of seats and holding meetings starting from next week despite not getting any indication from UMNO or Barisan Nasional (BN).

“We have not got any indication from UMNO or BN to discuss about seat allocation. We are not sure of the forward direction of UMNO and there is yet a clear statement from UMNO or BN leaders.

“But the reality is that we are together in the government. If we are to wait for other parties to make a decision and stand, it will interfere with the affairs of the general election that PN wants to arrange,” he said.

He was speaking at a media conference after chairing a PN Supreme Council meeting at its headquarters here, today.

As such, the Bersatu president said negotiations on seat allocation would be carried out from among Bersatu, PAS and Gerakan for Peninsular Malaysia and Parti Solidariti Tanah Airku (STAR) and Parti Progresif Sabah (SAPP) in Sabah.

Muhyiddin said it was among the issues discussed during the PN Supreme Council meeting today other than achieving a decision to support the Memorandum of Understanding (MoU) on Political Stability and Transformation signed between the federal government and PH on September 13.

He said PN would play a role to convey the views and stand of PN from time to time on the implementation of the MoU.

In addition, Muhyiddin would meet Prime Minister Datuk Seri Ismail Sabri Yaakob to deliver PN’s stand on the post of Dewan Rakyat Deputy Speaker who would be picked in the coming Dewan Rakyat session.

Muhyiddin also said that the official launching of the national level PN would be held in November to be hosted by the Selangor PN.

The PN Supreme Council meeting also discussed the approaches and programmes which would be implemented to support the young group in line with the implementation of Vote18 and was making preparation for the additional young voters.

BN yet to receive official application from PBM – Ahmad Zahid

Consideration on EPF withdrawal should focus on long-term needs – Economist