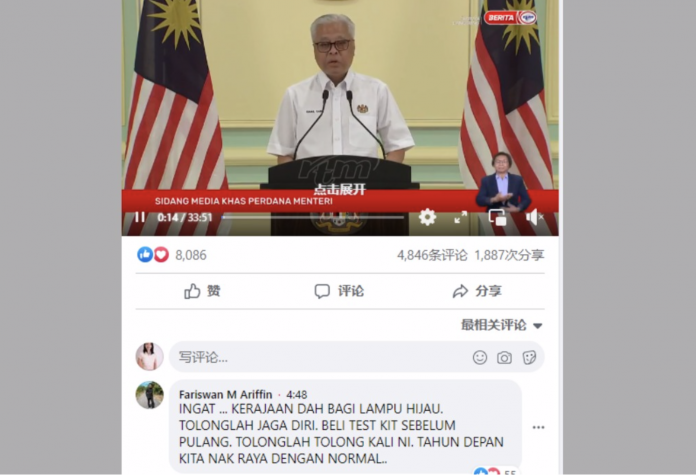 KUALA LUMPUR, Oct 10 — The long-awaited announcement on interstate and overseas travel has sparked enthusiastic reactions among netizens as if they were ‘celebrating victory’ today.

The approval effective tomorrow was made after the vaccination rate involving the adult population under the National COVID-19 Immunisation Programme PICK) reached 90 per cent.

Among the highlights was a comment by Mzaffar Nur who also gave a gentle reminder to those planning to travel interstate.

“We have been waiting for this announcement for a long time to meet our loved ones in the hometown, God willing we will practise the standard operating procedures set, so that everyone is safe.

Before going back, it is good to do a self-test first using a test kit as a backup,” he said.

Social media users Fariswan M Ariffin and Sofea Wong urged everyone to abide by the SOP at all times to protect themselves, their families and the public.

Several netizens also expressed appreciation to the frontline staff for their efforts to achieve the vaccination percentage, which in turn led to the interstate travel clearance.

Facebook user Samuel Fong in thanking everyone involved, especially frontline workers and the government for their efforts when the country was facing the COVID-19 pandemic added, “finally we can see the light at the end of the tunnel’.