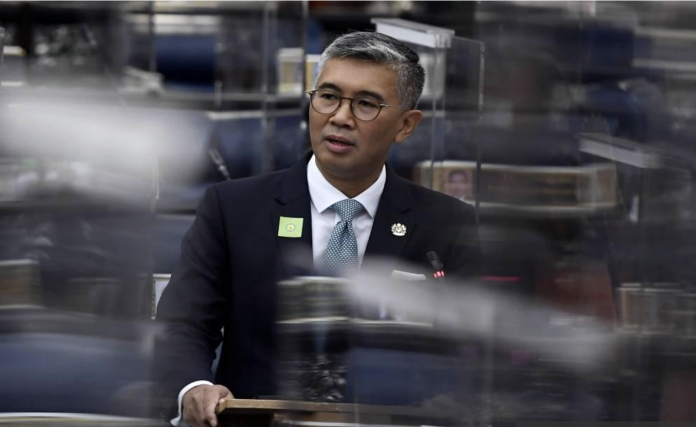 KUALA LUMPUR, Oct 11  — The Ministry of Finance (MoF) has tabled the Temporary Measures for Government Financing [Coronavirus Disease 2019 (Covid-19)] (Amendment) Act 2021 for the second reading in the Dewan Rakyat today.

The Bill aims to increase the federal government’s statutory debt limit from 60 per cent to 65 per cent of gross domestic product (GDP), which would allow the government to raise the ceiling cap for the COVID-19 Fund from RM65 billion to RM110 billion.

The additional allocation is needed to fund the four aid and stimulus packages, namely the Malaysian Economic and Rakyat’s Protection Assistance Package (PERMAI), National Strategic Programme to Empower the People and Economy (PEMERKASA), PEMERKASA Plus and the National People’s Well-Being and Economic Recovery Package (PEMULIH) announced by the government since the beginning of the year.

Finance Minister Tengku Datuk Seri Zafrul Tengku Abdul Aziz said the packages required an additional allocation of RM27 billion, and added that the fund will also be used for development projects under the 12th Malaysia Plan (12MP) to ensure that the nation’s recovery remains on track.

He said that as of September 2021, the government has spent RM60 billion of the RM65 billion allocated for the COVID-19 Fund, and the balance is insufficient to fund the packages announced this year.

Given the additional funds required, as well as the current economic performance and the statutory debt limit for this year and 2022, it was appropriate for the Temporary Measures for Government Financing (Coronavirus Disease 2019) Act 2020 to be amended, the finance minister said.

He added that in the medium term, the government remains committed to the fiscal consolidation measures outlined under the 12MP, with the deficit targeted to be reduced to 3.5 per cent of GDP by 2025.

Among other things, RM12.7 billion of the RM45 billion will be used to accommodate the additional allocation for the Wage Subsidy Programme, which was raised from RM18.3 billion to RM31 billion under the PEMERKASA, PEMERKASA Plus and PEMULIH packages.

Meanwhile, RM15.8 billion will be utilised as additional allocation for the Bantuan Prihatin Nasional, raising it to RM41 billion from RM25.2 billion previously after taking into account the appeals for the assistance which which were accepted and the increase in distributions under the PEMERKASA and PEMERKASA Plus.

“Additionally, a total of RM2 billion will be used to increase the allocation for small scale projects for G1 to G4 contractors from RM4 billion to RM6 billion, in line with the government’s aim to boost economic activities and reinvigorate the country’s economy,” he said.

Furthermore, RM3.6 billion will be utilised as additional allocations for the PRIHATIN SME Grant, which had been raised from RM2.4 billion to RM6 billion.

In addition, RM4 billion is needed to increase the allocation for the Ministry of Health for COVID-19-related expenditure from RM5 billion to RM9 billion; and RM5.9 billion to increase social assistance support for the vulnerable from RM110 million to RM6.01 billion.

Tengku Zafrul also called upon members of the Dewan Rakyat to give their full support for the amendment to help the people in their financial recovery from the COVID-19 crisis.

The Bill was tabled for the first reading in the Dewan Rakyat by Deputy Finance Minister Mohd Shahar Abdullah on Sept 28.

It was then unanimously passed without any amendment after being debated by 19 Members of Parliament from the government and opposition blocs.

Tengku Zafrul said it was also agreed during the winding-up session that the fiscal policy should support economic recovery plans for 2022.

“MoF wants to continue the expansionary fiscal policy stance.This is clearly shown with the government’s move to raise the ceiling limit for the COVID-19 Fund from RM65 billion to RM110 billion.

“The additional RM45 billion will be prioritised towards ensuring the people’s well-being and that business sustainability continues to be supported in order to stimulate economic activities next year and continue to drive a comprehensive economic reopening before year-end,” he said.