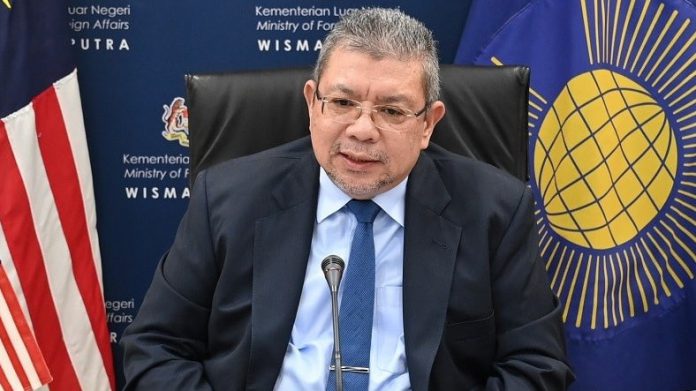 KUANTAN, Oct 30  — The Cabinet has decided that the Attorney-General Tan Sri Idrus Harun advises the Yang di-Pertuan Agong Al-Sultan Abdullah Ri’ayatuddin Al-Mustafa Billah Shah on the issue of the citizenship of children born to Malaysian women with foreigners.

Foreign Minister Datuk Saifuddin Abdullah said the decision was made because the issue of citizenship according to Federal Constitution involves the consent of the Conference of Rulers.

“The Cabinet empathies with the situation and we had discussed the issue at length. But we are also aware that the issue is under the purview of the Conference of Rulers and we have to abide by the correct channel.

“That is why the decision is for the Attorney-General to seek an audience with the Yang di-Pertuan Agong and we leave it to his wisdom (Idrus),” he told a media conference after attending a 2021 Deepavali programme at Kuantan Malaysia Hindu Sangam Association here today.

On September 9, the Kuala Lumpur High Court decided that a baby born overseas by a Malaysian woman who is married to a foreigner automatically qualifies for Malaysian citizenship.

However, on September 13, the government decided to appeal to quash the decision of the High Court.

Earlier, Saifuddin received a petition and open letter to the Cabinet from Family Frontiers, a non-governmental organisation on protecting the affected mothers via the campaign #TarikBalikRayuan.

In another development, Saifuddin who is also Indera Mahkota MP said his ministry was studying the cause why half of the 48 alternative education centres of Rohingya children in the country are still unregistered.

“The education centres are operated by NGOs and are not using public funds. However, we need them to register so that they can be monitored by the Ministry of Education.

“If not registered, we do not know of the curriculum and syllabus taught apart from enabling assistance from interest parties to contribute to the education centres,” he said.

Saifuddin said among the countries which gave education aid to the children of Rohingya was Qatar as the aspect of education is among the important elements they need when they return to their country of origin when the situation permits.

One psychiatrist for 100,000 people in Malaysia now – Health DG