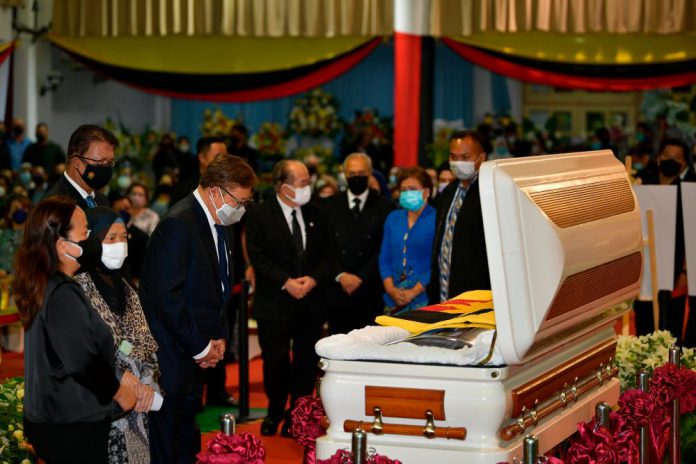 KUCHING, Nov 3  — The remains of Sarawak Deputy Chief Minister Tan Sri Dr James Jemut Masing, who died  last Sunday, will be at the Association of Churches in Sarawak (ACS) until 2 pm today for the public to pay their last respects.

Among those seen to have arrived was Sarawak Chief Minister Datuk Patinggi Abang Johari Tun Openg and members of the state cabinet. Also present at the ceremony were Masing’s immediate family members.

According to the Sarawak Public Communications Unit (UKAS), the session for dignitaries to pay their last respects is from 8.30 am to 9.30 am, followed by the session for members of the public from 9.30am to 2pm.

Following which, the body will be taken to the Nirvana Memorial Park here for burial.

Masing, who was Baleh State Assemblyman, died at the Normah Sarawak Medical Centre (NSMC) in Petra Jaya, Kuching,  at 7.05 am last Sunday. He was 72 years old.

The Parti Rakyat Sarawak (PRS) president was admitted to the Intensive Care Unit (ICU) of Sarawak General Hospital in September after testing positive for COVID-19 and then transferred to NSMC for follow-up treatment.

ProtectHealth offers home vaccination for the elderly with transport woes