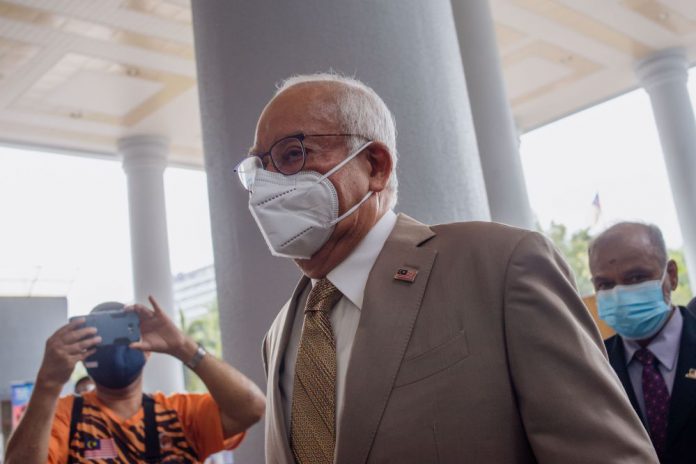 The items, including handbags of various brands, 27 vehicles and cash of various currencies seized from Najib, Rosmah, their three children and five other respondents, were allegedly linked to the 1Malaysia Development Berhad (1MDB) scandal.

Judge Mohamed Zaini Mazlan, in dismissing the application by the Attorney-General’s Chambers (AGC) to forfeit the items, said the AGC had failed to prove the nexus between the properties seized and the unlawful activities

“The properties seized from Najib, Rosmah, their two children, Nor Ashman Razak and Nooryana Najwa, as well as Najib’s stepson, Riza Shahriz Abdul Aziz, were seized from premises occupied or previously occupied by them and they are in any event, from the same family.

Justice Mohamed Zaini said the applicant had merely listed down the properties seized and their value and in turn concluded that the five respondents did not have the means to have such a huge amount of cash or purchase these properties based on their income, or the lack of it.

“It is apparent that the applicant had only come to this conclusion based on presumption and it is insufficient as the applicant needs to credibly proof a direct link between the monies that were allegedly illegally gained to the cash found and the properties bought,” he said.

The judge also rejected the application to forfeit a bungalow erected on two plots of land in Tanjung Bungah Park, Penang, as well as the money kept in three Hong Leong bank accounts owned by the 13th respondent Puan Sri Goh Gaik Ewe, who is the mother of fugitive businessman, Low Taek Jho or Jho Low.

“The applicant had merely shown monies credited into the bank accounts but did not provide any evidence on how these bank accounts were related to or used for the commission of the unlawful activities.

“The relationship between the 13th respondent and any of the characters or entities in the 1MDB affairs was conspicuously missing and there were many glaring discrepancies in the affidavits by the investigating officers which were never corrected or explained,” he said.

The government also failed to forfeit monies kept in the seven bank accounts belonging to the 14th and 15th respondent, Goldman Sachs’ ex-banker Roger Ng and his wife, Lim Hwee Bin, on a similar finding that the applicant did not provide evidence that the bank accounts were related to or used for the commission of the unlawful activities.

“The applicant also did not offer any evidence to show how the monies deposited into these bank accounts were linked to any illegal transaction…I am inclined to agree with their counsel and therefore dismissed the application,” said Justice Mohamed Zaini.

The court also denied the government’s request to forfeit 26 Nissan Urvan and a Nissan X-Trail vehicles owned by the seventh and eighth respondent named in the forfeiture suit, a management consultancy services company, Senijauhar Sdn Bhd and an individual named Aiman Ruslan, respectively.

Deputy public prosecutor Harris Ong Mohd Jeffery Ong informed the court that the AGC will be appealing against the ruling.

On May 8, 2019, the AGC filed a notice of motion to forfeit hundreds of items, allegedly linked to the 1MDB scandal,  including handbags of various brands and 27 vehicles seized from Najib, Rosmah, their three children, as well as 13 individuals and companies.

PKR abides by the decision of the people of Johor –...