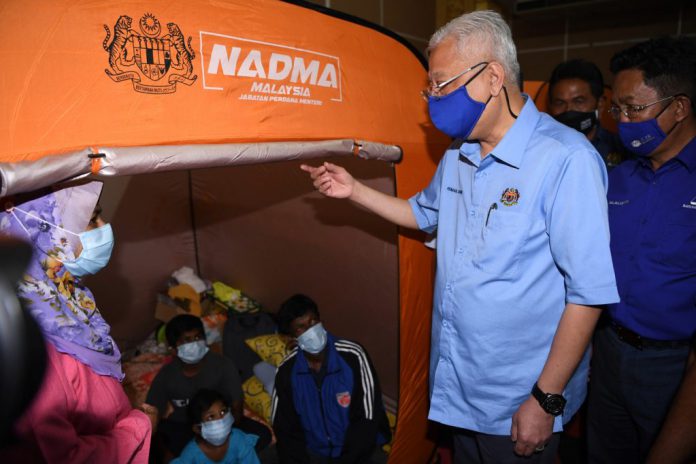 JELEBU, 21 Dis  — Perdana Menteri Datuk Seri Ismail Sabri Yaakob did not deny weaknesses in the flood management, especially in Selangor, but assured that they will be improved from time to time.

He said responsibility of managing flood disaster was not that of the federal government alone, as the state governments and relevant authorities at the districts also play an important role.

“I don’t deny (the weakness) and will improve in the future … The responsibility is not that of the federal government alone, but also the state governments and the frontliners are the districts.

“The National Disaster Management Agency (NADMA) only coordinates … if it is considered a weakness in coordination, I do not defend anyone in this situation, for me everyone must be held accountable,” he told reporters after visiting the flood victims at Dewan Besar D’Sury here.

Meanwhile, Ismail Sabri said during a meeting with the Menteris Besar this morning, it was found that the preparedness to face the floods in states like  Terengganu, Kelantan and Pahang was in order as the floods, especially, during this time of the year, is a normal phenomenon.

However, he said, the flood that occurred in Selangor was unexpected.

“In Selangor, there is a problem..we are transparent about this  and I do not want to cover anyone. In other states, (like) in the east coast, floods have become like an annual event, so all the preparations have been made, just waiting to open the PPS (relief centre), which have been identified and already there.

“Every year, the flood evacuees will move to the same place,” he added.

He said there are rules for opening a disaster operations centre and standard operating procedures that had to be followed, whereby an operations room is required to be opened when a house if affected.

In Selangor, he said, it was not one house, but all were affected by the floods, especially in the Petaling and Shah Alam districts.

“I don’t blame the netizens for making complaints, I’m thankful for continuing to complain to me,” he said.