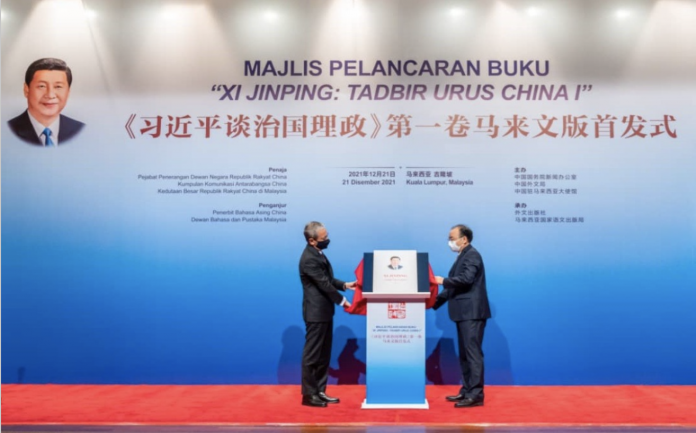 KUALA LUMPUR, Dec 21  — A book explaining Chinese President Xi Jinping’s success in steering the republic towards modernisation and globalisation in the new era was launched in the capital here, today.

The book titled ‘Xi Jinping: Tadbir Urus China 1’ revolves around a compilation of Xi Jinping’s work from Nov 15, 2012 to June 13, 2014 which includes 79 seminar speech texts, forums, interviews, comments, explanatory notes, speech excerpts and the essence of the statement which are all divided into 18 chapters.

Dewan Rakyat Speaker Tan Sri Azhar Azizan Harun when launching the book said the work published in Bahasa Melayu was aimed at increasing the Malaysian community’s understanding of the principles and concepts of the Chinese government under Xi Jinping’s leadership in steering the republic towards a developed nation.

“Xi Jinping has also succeeded in lifting hundreds of millions of people out of poverty in 10 years. The  book revolves around the background of his success in doing so,” said Azhar in his speech when launching the book at the Kuala Lumpur Convention Centre here.

Also present were the Ambassador of the People’s Republic of China to Malaysia Ouyang Yujing and Dewan Bahasa dan Pustaka (DBP) board of governors chairman Prof Datuk Dr Awang Sariyan.

Meanwhile, Ouyang Yujing said the launch of the book was very meaningful for him as 2021 was the 100th anniversary of the establishment of the Communist Party of China (CPC) where the eradication of absolute poverty was the new mission of national development in making China a modern socialist country.

Diplomatic relations between Malaysia and China began on May 31, 1974 when the then prime minister, Tun Abdul Razak, paid an official visit to Beijing.

Six arrested in January over suspected involvement in terrorist group –...