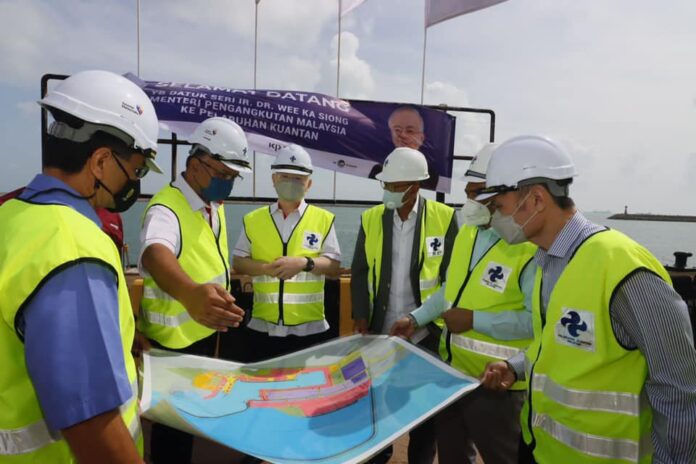 KUANTAN, Jan 16 — The amount of cargo handled at the Kuantan Port here is expected to increase by five per cent this year, from 22.9 million tonnes in 2021, said Transport Minister Datuk Seri Dr Wee Ka Siong.

He expects activity at the port, which has been operating since 1984, to be boosted with the presence of more investors in Kuantan, besides the improving economy after it was affected by the COVID-19 pandemic.

“Cargo handling last year dropped from 27.3 million tonnes in 2020 due to the pandemic, which affected many economic sectors.

“However, if you compare it with 2019, it actually increased by 4.5 per cent, which shows the huge potential of the Kuantan Port,” he told a media conference after launching the Kuantan Port Green Policy 2021-2030 here today.

Looking at the rapid development of Kuantan, Wee said work to expand the Kuantan Port had already been implemented to increase its cargo handling capacity to 50 million tonnes per year for now, 70 million tonnes for phase two and 90 million tonnes when completed.

Phase two of the expansion plan, according to him, involved the extension of the existing 1-kilometre (km) deep water terminal while the subsequent phase would involve the reclamation process for a new breakwater and terminal.

Although there is no date set for the completion of phase two of the expansion work, Wee said it was in the final stages of negotiations with potential investors.

Wee also hoped that the process could be completed within the same period as the East Coast Rail Link (ECRL) Project that is expected to be ready in December 2026, as the route is set to be the ‘land bridge’ connecting the Kuantan Port and Port Klang in Selangor, thus facilitating the cargo deliver process as well as save time and cost.

“This expansion is necessary to meet current needs that are growing rapidly with the existence of the Malaysia-China Kuantan Industrial Park (MCKIP) here, besides the Gebeng Special Development Plan in Kuantan that is being implemented by the Pahang government.

“This will increase investment and the import-export activities in Kuantan. The location of the Kuantan Port in the South China Sea makes it a vital route to Japan and China compared to Port Klang or Penang, which requires (ships) to head south of the peninsula before entering the South China Sea,” he said.

On the Kuantan Port green policy, Wee said that, among others, it involved the objective of ensuring quality air, land and sea cleanliness; waste management was always at optimal level; expanding energy and water resource efficiency; and driving towards a smart port operating ecosystem.

There are five strategic thrusts to achieve the objective, among them include implementing initiatives to reduce the carbon footprint at the port, reduce the level of air and sea pollution at the port as well as systematic waste management control.

Redevelopment of Dato Keramat Market to begin in 2024

Govt does not interfere with work of Independent Special Committee on...