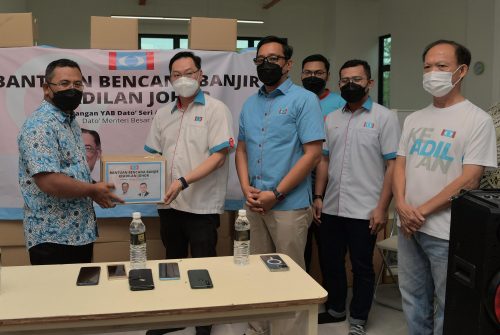 ISKANDAR PUTERI, Jan 16  — A total of 36,000 household heads in Selangor have received aid of RM1,000 each, through the Selangor Bangkit initiative which started at the end of December.

Menteri Besar, Datuk Seri Amirudin Shari said the state government expected the number of household heads who would be receiving the aid to reach 40,000 next week, thus bringing the aid channelled to RM40 million.

He said that 11,194 household heads who were evacuated to temporary relief centres (PPS) in Selangor had received the aid.

“The figure continues to increase now… we are in the midst of making house-to-house registrations, a census is being done; when we get (the findings) we will distribute the aid in a week.

“Initially we targeted 30,000 families only, but today alone there are already 36,000 and more registrations are coming in.

Earlier, Amirudin handed over contributions of 1,000 food baskets to flood victims in Johor, from the Selangor government at Bandar Medini here today.

At the end of last year, he said that flood victims would receive RM1,000 aid each through the Selangor Bangkit initiative.

Recipients were divided into three categories, namely, victims housed in public PPS; victims placed in private PPS and those who were not evacuated to a PPS.

COVID: Kedah JKN targets 80 pct of children to be vaccinated...