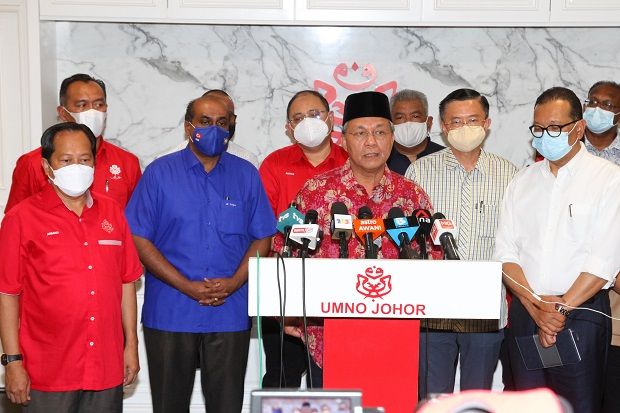 JOHOR BAHRU, Jan 22 — The state Barisan Nasional (BN), especially Umno, today expressed confidence that the party has a great chance of winning the state election and to form the state government.

Johor Umno Liaison Committee chairman Datuk Hasni Mohammad said his party was also prepared to to field more candidates as compared with the number during the 14th general election (GE14).

He said statewide, the party machinery was ready and has shown high spirits to face the upcoming state election.

“Umno has a very good chance (of winning the Johor state election), we have high confidence and we hope to be able to contest more seats compared to GE14, ” he told reporters at the Johor Umno Building, here today.

When asked about discussions on seat allocation among the component parties, Hasni, who is also the Johor BN chairman, said this would be finalised soon.

In addition, the BN Benut incumbent said cooperation between the coalition and other parties (PAS and Bersatu) is not over yet.

“Any form of cooperation or party composition that will contest in the Johor state election is subject to the decision of the party leadership. The state will provide feedback on the decision, including cooperation between component parties within BN,” he said.

Hasni in jest added that he would contest in the state election if he is nominated by the party president.

Earlier, the Johor Menteri Besar confirmed the state assembly dissolution in a press conference after an audience with Sultan of Johor Sultan Ibrahim Sultan Iskandar at Istana Bukit Serene here this evening.