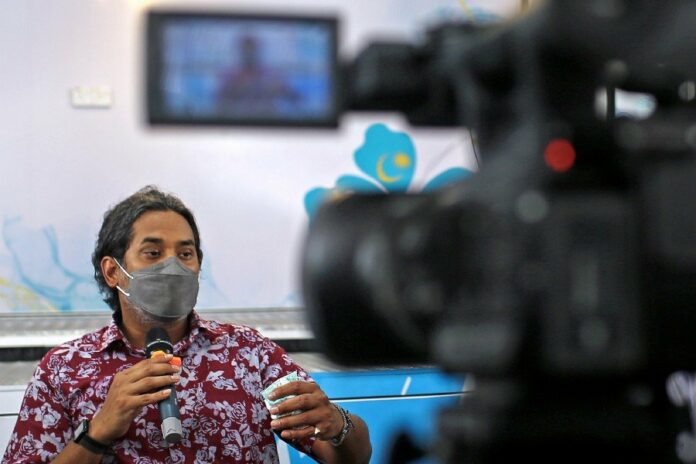 PORT DICKSON, Feb 12 — The Health Ministry (MOH) is of the opinion that the Johor state election can be conducted with standard operating procedures (SOP) that are less stringent than those applied for the Sarawak and Melaka polls held earlier.

Health Minister Khairy Jamaluddin said this was based on studies done by MOH concerning the effects of the COVID-19 Omicron variant on public health and the fact that the country had achieved a high vaccination rate.

“MOH has finalised (Johor polls SOP). The SOP is still tight, but there are more things that MOH allows (now). We cannot elaborate; wait for an announcement by the Election Commission (EC) later.

“We could see that the Melaka and Sarawak polls did not trigger any spike or cluster. People who claimed it is irresponsible (to hold the polls) just refused to admit that we have succeeded in terms of public health. We are still confident that a state election can be held again,” he added.

He was speaking to reporters after witnessing the signing of an agreement on health promotion cooperation between Wellness Hub KKM and its strategic partner here today. Also present was Negeri Sembilan Health director Datuk Dr Harlina Abdul Rashid.

Khairy, however, stressed that compliance with the SOP during the Johor polls, including among political leaders, was important to prevent the spread of COVID-19.

The EC has set March 12 for polling, while nominations will be held on Feb 26 and early voting on March 8.

Meanwhile, Khairy said the eight-week interval between the first and second doses of children’s vaccination would be maintained as this is the most effective period for now.

“I have referred this matter to the technical working committee and we are still maintaining the eight-week interval despite the Omicron wave. However, the stand of this committee is subject to revision from time to time,” he said.

Asked on contract doctors’ request for permanent posts to come with Employees Provident Fund (EPF) contributions, Khairy said for now the ministry was just offering them the pensionable scheme.

“It involves 4,186 additional permanent posts to be created by MOH by June. Maybe for future recruitments we can offer EPF,” he said.

Meanwhile, he said MOH would continue to step up enforcement of the smoking ban in public places with the cooperation of other agencies and members of the public.