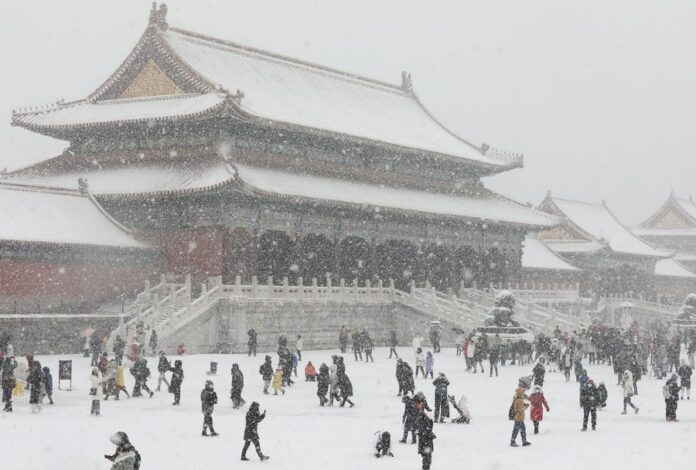 BEIJING, Feb 13 — The Beijing Meteorological Observatory issued a yellow alert for heavy snow at 12.55 pm. Sunday, with average snowfall exceeding 4 millimetres in the city and more on its way, Xinhua news agency reported.

Global athletes competing in the ongoing Winter Olympics and locals in Beijing woke up to an icy setting on Sunday as heavy snow started hitting early in the morning.

The yellow alert was upgraded from a blue one issued hours earlier in the morning. It notes that by 5 am on Monday, accumulative snowfall is expected to reach 6 millimetres in most of the city and more than 10 millimetres in some areas in the north and the west.

Zhang Yingxin, the chief forecaster of the municipal observatory, said Sunday that the snowfall would gradually subside after 3 am Monday.

A yellow alert for heavy fog and icy roads has also been issued as visibility could be less than 1,000 metres, or 500 metres in some areas, due to the impact of the snow.

People have been advised to pay more attention to road safety. Snow clearing work has been launched across the city, especially for the smooth movement of traffic within the closed loop of the 2022 Beijing Winter Olympics.

Heavy snowfall-caused poor visibility has forced some events at the Winter Olympics to be postponed, including the women’s free-ski slopestyle qualification previously scheduled for Sunday. China’s prodigy Gu Ailing will compete in this event.

The Beijing 2022 organisers have confirmed that the first qualification run will begin at 10 am Monday.