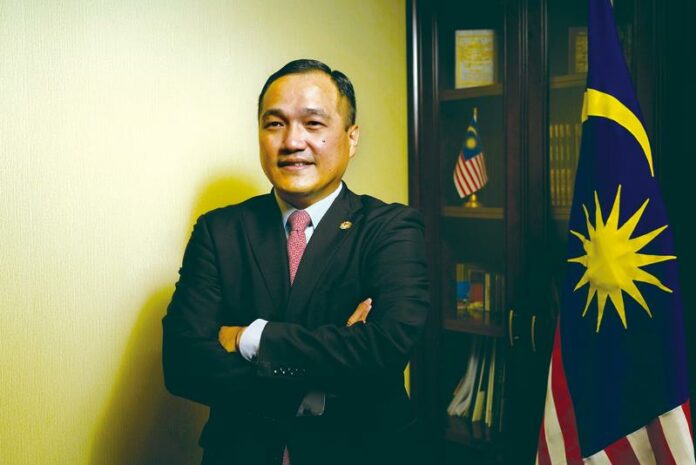 Editor’s note: This is the third part in a series of China Daily’s interviews with the heads of consular missions based in Guangzhou, notably from the Association of Southeast Asian Nations. The envoys discuss ways to deepen cooperation in various fields between their countries and the Guangdong-Hong Kong-Macao Greater Bay Area.

The rapid development of the Guangdong-Hong Kong-Macao Greater Bay Area is expected to drive more Chinese mainland companies to expand overseas and spur greater demand for goods and talent, which will bring tremendous opportunities for Malaysia, says Beh Ching Chye, consul general of Malaysia in Guangzhou.

Calling it an “epoch-making” and “innovative” initiative, as well as a “significant milestone” in China’s reform and opening-up, he says the Greater Bay Area’s development is very important for Malaysia. “I can see there is huge potential, with many great opportunities up for grabs for Malaysia.”

The 11-city cluster is seeing rapid development in innovation and technology, with a growing number of tech firms expanding their footprints overseas, especially in Southeast Asia, hoping to capitalize on its robust economic growth and demographic dividends.

Many Chinese companies from the Greater Bay Area prefer to expand their operations or invest in Malaysia given that country’s political stability, a pool of quality talent and knowledgeable workers, well-developed infrastructure, high investment incentives and no language barriers, says Beh.

Malaysia is well-positioned to serve as “a preferred choice location for Chinese companies to establish their operational headquarters, financial establishment and manufacturing facilities”, the envoy told China Daily in an interview.

The increasing number of high-tech companies in the Greater Bay Area will help boost Malaysia’s manufacturing as the demand for electronic products, semiconductors and chips will grow. They also need more international talent to work in the region, creating more jobs for talent from the Southeast Asian nation, says Beh.

On the other hand, Malaysian firms’ interest in setting up businesses in the Greater Bay Area is also on the rise, pinning high hopes on the region’s economic vitality.

According to an HSBC survey released in November last year, international enterprises are positive about the Greater Bay Area’s economic outlook, with more than half of the respondents expecting the region to enjoy higher growth than the rest of the country in the next three years.

Malaysian businesses are particularly upbeat, with 74 percent of them very optimistic about the region’s prospects, said the survey, which based its results on a poll of more than 2,100 businesses from 10 markets, including the United States, Canada, Mexico, the United Kingdom, France, Germany, the United Arab Emirates, Singapore, Australia and Malaysia.

Currently, several Malaysian companies have invested in mainland cities in the Greater Bay Area. Aluminum firm Press Metal set up a subsidiary in Foshan in 2005 with an annual production capacity of 120,000 metric tons. It was preceded by Perfect (China) Company, which manufactures cleaning and beauty products and began operations in Zhongshan in 1994.

“We believe the Chinese government’s strong support, with various incentives and policies for foreign investment, will spur it in future,” says Beh. Total bilateral trade between Guangdong province and Malaysia grew 18.2 percent year-on-year to about $40 billion from January to November last year, according to Beh, citing data from IHS Markit.

While Guangdong’s exports to Malaysia rose 27.3 percent on a yearly basis to $15.4 billion during the same period, the Chinese province’s imports from Malaysia increased 13.1 percent to $24.6 billion. “Although the trading volume between Malaysia and Guangdong is about one-third of total trade between Malaysia and China, we strongly believe there is more potential for growth, maybe by another 5 to 10 percent,” says Beh.

According to the Annual Report on Development of Malaysia 2021, jointly published by Beijing Foreign Studies University and Peking University, cooperation between China and Malaysia has deepened despite the COVID-19 pandemic.

The two countries have established a close partnership in the digital economy, including e-commerce, electronic payments and cloud computing, the report said. By working together, China could expand its presence in the Southeast Asian digital economy market, and Malaysia could embrace technological upgrading, creating a win-win situation, it said.

Both sides are working together in financial development. The Shenzhen Stock Exchange signed a memorandum of understanding with Bursa Malaysia, Malaysia’s stock exchange, in 2020 to promote investment flows between the two sides. Under the agreement, the two sides would display selected mutual benchmark index constituents of their respective markets on both exchanges’ websites.

Beh is confident Malaysia will boost bilateral exchanges with China in a wide range of areas. They include stepping up cooperation in developing COVID-19 vaccines and drug research, facilitating industrial upgrade and innovation-driven development to foster new sources of growth with 5G and the digital economy, working together in the

For the Greater Bay Area, the focus will be on trade and investment, technological innovation, tourism and education, stresses Beh.

In his view, it’s important to adopt a “new and creative” approach to intensify bilateral cooperation amid the pandemic, such as promoting online operations and sales on e-commerce platforms with key opinion leaders to enhance the image of Malaysian products and brands, and increase their awareness among Chinese consumers.

EMCO: Pengkalan Hulu MRSM students not given Raya food from outside...