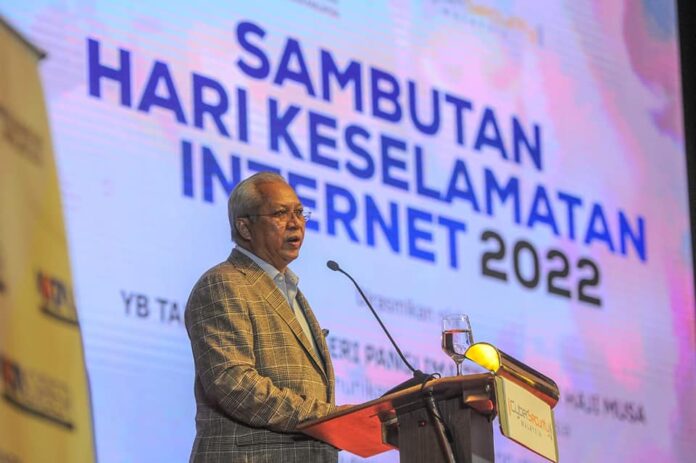 He said that was among the main findings of the Cybersecurity Awareness Benchmark Study 2021/2022 conducted by CyberSecurity Malaysia (CSM) in the period between Nov 16 and Dec 3, 2021, with the assistance of the Education Ministry’s Education Resource and Technology Division.

“There are many interesting and surprising discoveries in the study, including internet addiction, which I’m given to understand, the rate of addiction in Malaysia is quite high compared to other countries.

“The addiction could be positive in nature but it is worrisome as addictions are associated with negative elements,” he said during his speech when officiating the Internet Security Day 2022 – Malaysian Edition and the launch the executive report of the study here today.

Based on the study’s report, the identified signs of internet addiction include sleeping late, preferring to interact with smartphones than playing with friends as well as getting angry when not being allowed to use smartphones.

Annuar said the Cybersecurity Awareness Benchmark Study 2021/2022 used a large and diverse sampling to detect and study trends about the use of the internet and technology.

A total of 16,908 respondents throughout the country were involved in the study, including 13,953 primary and secondary school students, as well as special education students and 2,955 parents.

He said the components that required attention based on the study’s results include unsuitable internet content and risks associated to online transactions.

“I hope we can summarise the methods that can be used so that the development of internet technology can be beneficial,” he added.

“Parents can no longer view providing smartphones to children in the context of facilitating home-based teaching and learning and leave it unsupervised.

“They (parents) need to monitor and there needs to be a mechanism or security so that the device given, especially to those who are too young, cannot be dismissed so casually,” he said.

In the media conference following his speech, Annuar said that cyber threats were real and had several stages, including data and cross-border threats that were hard to overcome.

“Cyber threats are real and they can affect the quality of life for our people and our communities besides the aspect of security in terms of data loss, national security and other negative effects,” he said.

The current emphasis should be on building a system of values among individuals and family institutions to ensure internet use is not misused, he added.

Govt mulls compulsory use of face masks in public areas