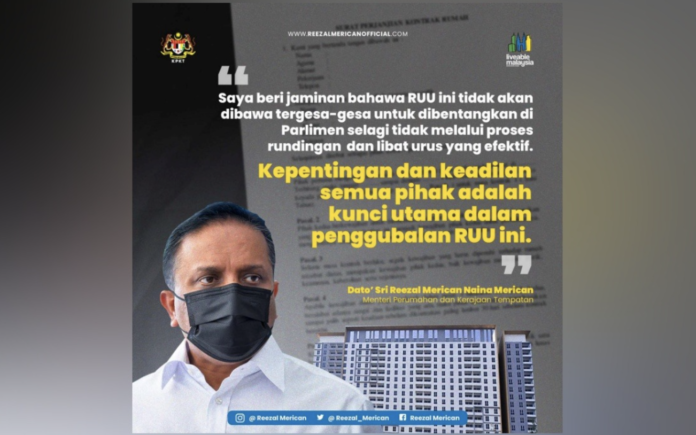 PUTRAJAYA, Feb 23  — The proposed enactment of the Residential Tenancy Act will not be tabled in Parliament in a hurry until it goes through an effective negotiation and engagement process, said Housing and Local Government Minister Datuk Seri Reezal Merican Naina Merican.

In a post on social media today, he said he was in the process of examining the views of various parties, including the National House Buyers Association (HBA) on the bill.

According to him, he is aware that there are several components in the proposed bill that are of public concern.

“I am well aware of it. In fact, I also feel unhappy, and even do not agree with some of the initial proposals put forward in this bill,” he said.

Among the components said to be of concern in the bill is the establishment of a tribunal to resolve disputes between landlords and tenants as the mitigation process in court may involve high costs, issues of dealing with unreasonable rental rates as well as issues of racial discrimination between tenants and homeowners.

“The interests and justice to all parties are important in the drafting of this bill. Continue to give your views … we all want this bill to reflect justice and safeguard the interests of all parties,” he added.

The bill, among others, aims to protect the interests and rights of tenants and homeowners. According to media reports, the bill is expected to be tabled in the Dewan Rakyat in the third quarter of this year.

Some still assume all schools will reopen on Oct 3 –...

Party hopping among issues to be addressed in constitutional amendments by...