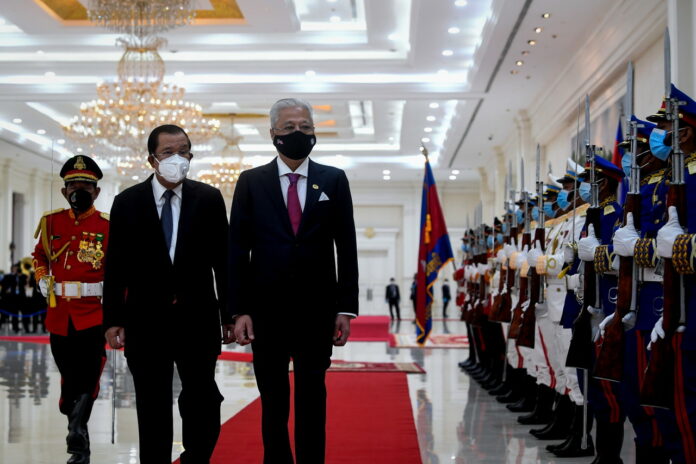 PHNOM PENH, Feb 24  — Prime Minister Datuk Seri Ismail Sabri Yaakob attended an official welcoming ceremony at the Peace Palace, which is also the Office of the Prime Minister of Cambodia, this morning in conjunction with his visit to the country at the invitation of his Cambodian counterpart Samdech Techo Hun Sen.

Immediately after his arrival at the Peace Palace, the national anthem of Malaysia “Negaraku” and Cambodia’s national anthem “Nokor Reach” were played, before Ismail Sabri was accompanied by Hun Sen to inspect a guard of honour.

Ismail Sabri had earlier visited the Cambodia Independence Monument where he placed a wreath, followed by a similar ceremony in the same area at the Monument of Preah Borom Ratanak Kaudh, which was erected in honour of the late King Norodom Sihanouk.

The two leaders will hold a four-eyed meeting to discuss bilateral ties, regional issues and cooperation at the international level.

The prime minister is also scheduled to have an audience with King Norodom Sihamoni at the Royal Palace, before departing for Bangkok, Thailand, later today.

Cambodia, the host of ASEAN 2022, is the fourth country in Southeast Asia to be visited by Ismail Sabri since he was sworn in as Malaysia’s ninth prime minister on Aug 21 last year. Putrajaya and Phnom Penh established diplomatic ties 65 years ago.