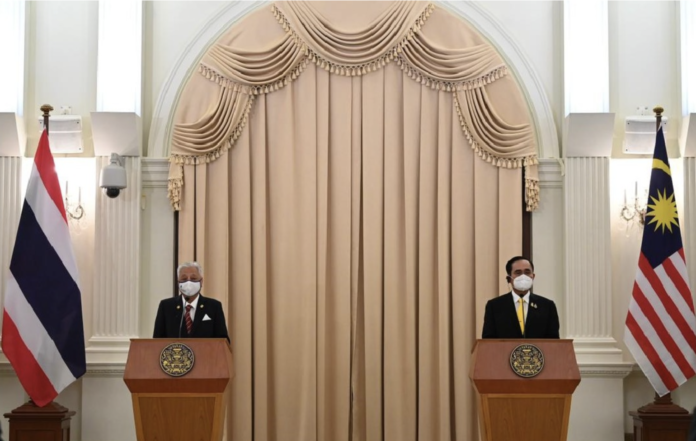 BANGKOK, Feb 25 — Malaysia and Thailand have agreed in principle to implement air, land and sea VTL to facilitate the movement of people of the two countries.

Prime Minister Datuk Seri Ismail Sabri Yaakob said the related ministries and agencies would be holding discussions on the details of the standard operating procedure (SOP) to reopen the border soon via Vaccinated Travel Lane (VTL) and Test & Go scheme.

“For a start, we can implement the Air VTL between Kuala Lumpur and Bangkok for travellers who are fully vaccinated. We will also consider adding other destinations in future.

“The VTL scheme will also be expanded to open land borders via Bukit Kayu Hitam-Sadao as well as all CIQ in the north of the peninsula and southern Thailand and the SEA VTL between Langkawi and Satun.

“This will certainly assist to revive the economic and business network between the two sides especially in the tourism sector,” he said in a joint media conference after a restricted meeting with Prayuth.

Ismail Sabri who is on a three-day official visit to Thailand since yesterday on the invitation of Prayuth.

The official visit of Ismail Sabri is part of his familiarisation tour of Southeast Asian countries since he was appointed Prime Minister in August 2021.

In the meeting with Prayuth, Ismail Sabri said both prime ministers also discussed the construction of a second friendship bridge across Rantau Panjang and Sungai Golok, and a new bridge for Pengkalan Kubor to Tak Bai be expedited.

“We both agree that the related agencies expedite the construction of the projects to facilitate the movement of people and goods between the two countries,” he said.

Ismail Sabri also hoped to enhance the close cooperation with Prayuth to improve bilateral ties to a higher level.

“As the nearest neighbours, it is important for Malaysia and Thailand to forge cordial relations at various levels while exploring new fields of cooperation especially in efforts to recover from the effects of COVID-19 pandemic,” he said.

On regional issues, Ismail Sabri said he and Prayuth also discussed the situation in Myanmar.

“We concur that it was important for ASEAN to continue playing a positive and constructive role in seeking a peaceful and lasting solution in the interest of Myanmar and also the ASEAN Community.

“We share the same view that it was important for Myanmar to cooperate in the implementation of the Five-Point Consensus and the need to preserve the credibility and integrity of ASEAN. We hope that democracy will return to Myanmar, ” he said.

“I hope to return to Thailand to attend the APEC Summit at the end of the year,” he said.

Malaysia and Thailand have established diplomatic ties for 65 years since Malaysia became independent in 1957.