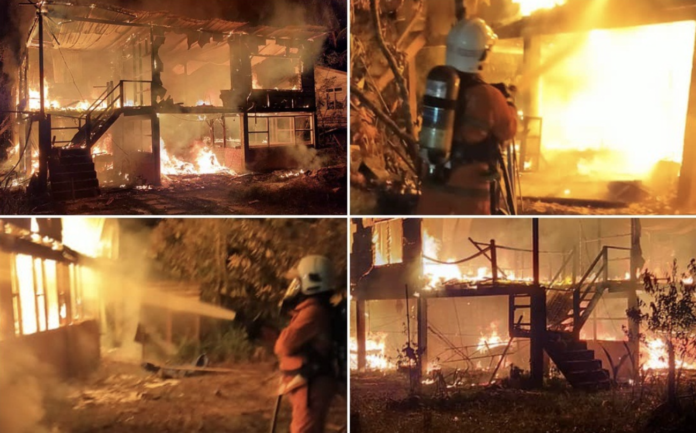 LIMBANG, Feb 26 — Three brothers were burnt to death when the house they lived in with six other family members in Kampung Seberang Kedai, Lawas here, caught fire last night.

The other six family members were reported to have escaped from the burning house.

A spokesperson from the Operations Centre of the Sarawak Fire and Rescue Department said a team of seven firefighters from the Lawas Fire and Rescue Station rushed to the scene, which is about 17 kilometres away, after receiving a distress call at 11 pm.

“The fire involved a two -storey semi-permanent structure residential house which was 100 per cent destroyed (when the fire team arrived),” said the spokesperson.

According to the spokesperson, the six victims who managed to escape in the fire were the victims’ parents,  Azrie Latip, 45, and Dayangku Hadianawati, 38, their older siblings , sister Ariesya Aryana Azrie,14, and brother Muhd Hezrie Azrie,12, and their grandparents  Awangku Jeman Pengiran Abd.Hamid, 72, and Aminah Matusop, 73.

The firefighting operation ended at 12.45 am today and the bodies were handed over to the police for further action.

All nurseries, kindergartens in Kuching to remain closed during CMCO