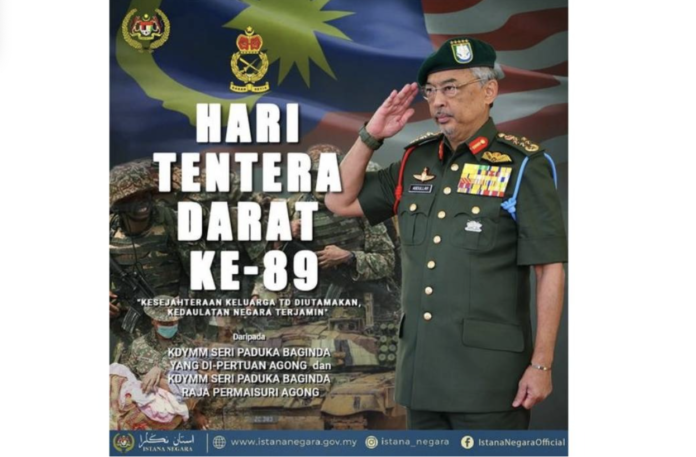 KUALA LUMPUR,  March 1  —  The Yang di-Pertuan Agong Al-Sultan Abdullah Ri’ayatuddin Al-Mustafa Billah Shah wished all members of the Malaysian Army, veterans, as well as others who had served the military branch, a happy Malaysian Army Day in conjunction with its 89th anniversary today.

Istana Negara, in a statement posted via its Facebook account, stated that His Majesty expressed his utmost appreciation to members of the Army in safeguarding the country’s sovereignty and for their sacrifices in helping those in need when several states were hit by severe floods.

Sultan Abdullah also expressed his appreciation to the entire families of the Army officers and members who were killed while on duty, and in protecting the sovereignty and security of the country.

“His Majesty prays that their souls be showered with blessings by Allah SWT and placed with the righteous,” it said.

As the supreme commander of the Malaysian Armed Forces, Sultan Abdullah also commended and expressed deep appreciation for the services and sacrifices made by all the present and former army personnel in protecting the country’s sovereignty and security.

“May the Malaysian Army continues to be a respected force at the international stage,” it said.

The Malaysian Army Day is celebrated on March 1 every year.