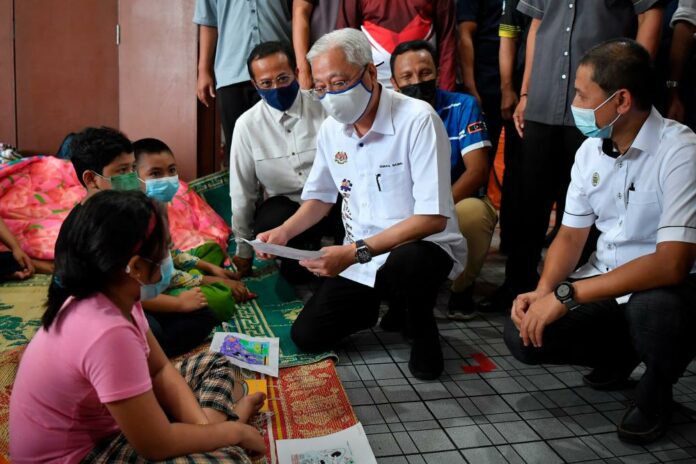 Ismail Sabri said whatever form of assistance that had been channelled to flood victims before, will also be distributed to the affected residents in Kelantan and Terengganu.

“It includes RM1,000 Bantuan Wang Ihsan (BWI) compassionate aid, RM2,500 to buy household necessities, to repair people’s houses… it’s the same,” he told reporters after meeting the flood-affected residents who were housed at the PPS.

He said if all forms of assistance were combined, including vouchers for the purchase of goods, nearly RM10,000 will be channelled to each affected household.

Today, a total of 76 household heads received RM1,000 in cash to ease the burden due to massive floods that hit the district on Sunday.

The prime minister spent about half an hour meeting and chatting with the evacuees before handing over donations to those affected by the floods.

Hulu Terengganu is the district worst affected by the floods including several areas that have never been flooded before, were inundated with floodwater this time, causing serious property damage.

The area was flooded so quickly causing many residents to panic that some of them fled to the nearby forest area as PPS was also flooded.

As of 2 pm, the number of evacuees was 15,317 people from 4,011 families who were housed in 68 PPS in the districts of Kemaman, Hulu Terengganu, Dungun, Kuala Terengganu, Kuala Nerus, and Setiu.