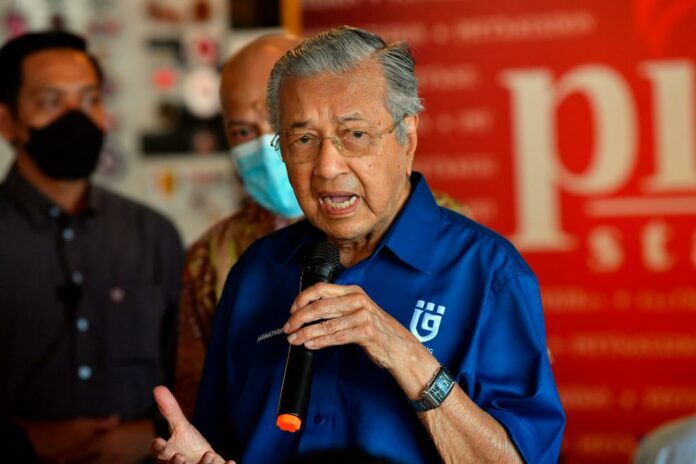 BATU PAHAT, March 3  – Parti Pejuang Tanah Air (Pejuang) is willing to work with other parties that are on “the same page” with it to form the next Johor state government, said its chairman Tun Dr Mahathir Mohamad.

The 97-year-old twice former prime minister, who for the first time came down here today to help Pejuang’s campaign in the Johor state election, said these parties must hold the same principles as Pejuang, especially in eliminating corruption.

“If they uphold the same principles (to have a clean government), we are willing to work with them to increase the number (of State Assembly seats) so that we can form the (state) government.

“There are two or three parties (that fit the bill) but we have not decided which are the ones (to work with),” he told reporters after joining the party’s “Aspirasi Johor” programme in Felda Ayer Hitam here.

On Pejuang’s chances in the election, Dr Mahathir said the Malay-based party was receiving good response, including from non-Malays.

Pejuang is contesting 42 out of the 56 seats up for grabs in the election.

Asked about the Menteri Besar candidate from the party, the elder statesman that it depended on its candidates who won in the election.

“Even if we give a name, if he loses, he cannot be the Menteri Besar. That is why we are not naming a menteri besar candidate,” he said, adding that Pejuang has several candidates who are capable of holding the post.

Earlier, Dr Mahathir had lunch with the Chinese Commerce and Industry Association here.

On his presence in Johor despite having just recovered from a serious illness, the former doctor said he came down to tell the people of Johor about the importance of establishing a clean government.

Polling is on March 12 while early voting on March 8.