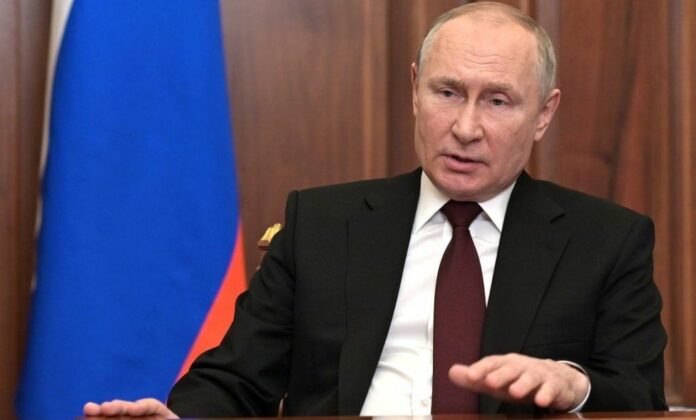 KUALA LUMPUR, March 4 — The United States, the European Union (EU) and many other nations have announced a wave of sanctions on Russia, with the hope Moscow will reconsider its aggression over Ukraine.

However, a geopolitical analyst cautions the move may not immediately yield the intended outcome as Moscow intensifies its attacks over the eastern European nation.

Benjamin Robin Barton, Assistant Professor at the School of Politics, History and International Relations, University of Nottingham, Malaysia said, instead, the sanctions could push Moscow to realign its national policy to seek economic survival beyond countries aligned with the West.

He underscored that Russia would continue to be one of the world’s major powers even if the sanctions could prove detrimental in its ability to project power over time.

“Sanctions are the West’s preferred choice of action for now, because they allow for a relatively credible and non-violent response to Russian provocation.

“(But) Authoritarian leaderships sometimes thrive off sanctions. They can work both ways – they can certainly contribute to worsening the state of the national economy or they can also play into the hands of nationalistic leaders who feed off them as evidence of a Western agenda against Russia,” he said in an interview with Bernama.

Since Russian President Vladimir Putin launched a full-scale military attack on Ukraine in the morning of Feb 24, countries worldwide led by the United States had announced sanctions and economic pressure on Moscow.

Those sanctions include booting out Russian banks from using SWIFT, the global messaging system that enables financial transactions across borders and companies, literally cutting business ties with the Russian federation.

Closer to home, Malaysia’s neighbour Singapore, on Monday condemned Russia for the unprovoked attack and said it will impose export controls on items that could be used directly as weapons in Ukraine to inflict harm or to subjugate the Ukrainians, and block certain Russian banks and financial transactions connected to Russia.

While in Japan, Prime Minister Fumio Kishida said the country’s sanctions on Russia include freezing capitals, ban on issuing visas to Russian citizens and entities, freezing assets of financial organisations, and ban on the goods that might be used for military purposes.

Barton stressed that this crisis also risked the breakup of the world current’s geopolitical equilibrium, resulting in indirect repercussions for the Indo-Pacific’s political and economic architecture.

International sanctions could further push Russia into a relationship of economic interdependence with China, besides driving Moscow to seek closer commercial and political ties with other countries, including in Southeast Asia where Russia has been active in attempts to build up its profile.

“This is something which could prove politically tricky for Putin over time in term of the growing asymmetry in China’s favour’s of Moscow’s own bilateral relations with Beijing,” he opined.

Barton also concurred that despite the initial talk between Moscow and Kyiv fell through, negotiations remains paramount to bring an end to the crisis.

For effective negotiation to take place several factors must be considered with the foremost, Russia must halt its aggression in Ukrainian sovereign territory.

Putin should also curtail his support for the separatist factions in the Ukraine and drop the rhetoric of justifying the attacks, he said.

Barton added that for its part, Ukraine needs to stop provoking Moscow by seeking to fully integrate with Western institutions such as North Atlantic Treaty Organisation (NATO) and the EU.

“As of right now, even if dialogue is still possible and ongoing, it would seem that NATO and the EU are playing a waiting game to see how Putin responds as the military campaign becomes mired in complications as the international campaign of disaffection with Russia’s actions snowballs,” he said.

The second round of negotiations between Moscow and Kyiv was expected to be held in Belovezhskaya Pushcha on the Belarus-Poland border, on Thursday.

The General Assembly during its 11th Emergency Special Session on Wednesday passed a resolution demanding that Russia ceases its military operation in Ukraine.

The resolution was adopted by the 193-member UN General Assembly with 141 affirmative votes, five against and 35 abstentions. Russia, Belarus, Syria, North Korea and Eritrea voted against the adoption.

The adoption comes after the General Assembly held its Emergency Special Session on the situation in Ukraine on Monday and Tuesday.

According to United Nations (UN) figures, at least 227 civilians in Ukraine have been killed, including 13 children, and over 400 others injured, while an estimated one million people have fled Ukraine to neighbouring countries.

Putin on last Thursday announced a “special military operation” into Ukraine with Russian forces capturing many of Ukranian towns and cities. Talks between Ukrainian and Russian officials on Monday at the Ukraine-Belarus border saw no breakthrough in stopping the conflict.

Over 1,700 premises in Penang ordered to close due to SOP...

Vaccinations are not compulsory, say Khairy