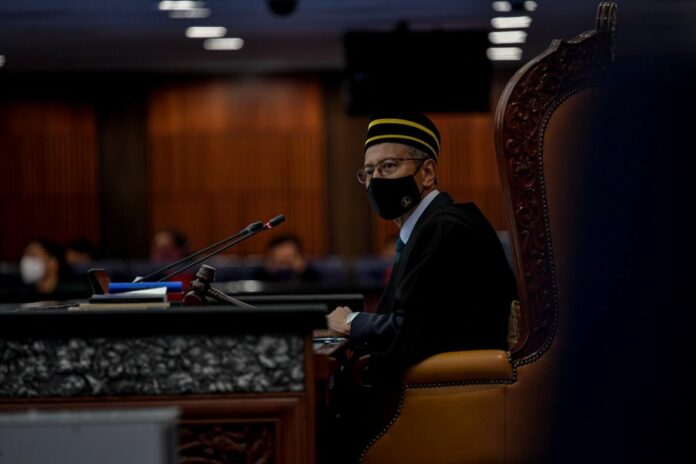 KUALA LUMPUR, March 8 — Dewan Rakyat speaker Tan Sri Azhar Azizan Harun has preliminarily accepted the motion on the flash floods that hit most areas in the capital yesterday, to be debated in the Dewan Rakyat.

Azhar said he received the notice from Bukit Bintang member of parliament Fong Kui Lun at 10 pm last night and Ahmad Fahmi Mohamed Fadzil (PH-Lembah Pantai) at around 10 am today.

He explained the motion would not be debated today as it needed 24 hours to be scrutinised under Standing Order 18 (2).

“But preliminarily, I suggest that the matter be discussed (debated) … that’s all my comment so far. But I do not allow it (to be debated) now, because it takes 24 hours (to be considered) … if I allow it, there is only one reason, because it (the motion) is the same,” he said.

Earlier today, before the debate session on the Royal Address took place, Fong stood up to request that the flash floods that hit Kuala Lumpur yesterday be discussed immediately, supported by Fahmi.

“Yesterday, flash floods struck many areas especially Bukit Bintang, Cheras, Seputeh and  Lembah Pantai.  I request that the motion be debated in this august House…it involves the public interest,” he said.

Several areas in the Klang Valley, including major roads in the Kuala Lumpur centre were struck by flash floods following a heavy downpour from 2.30 pm yesterday.

Meanwhile, Isnaraissah Munirah Majilis (Warisan-Kota Belud) stood up to submit a motion to debate the issue of the payment order of USD14.92 billion or RM62.59 billion by the Paris arbitration court to the Sulu Sultanate as it was a matter of public interest that needed to be expedited.

“This is a matter of people’s interests, regarding the sovereignty of the country, especially Sabah. Malaysia is made up of three regions and the federal government is responsible for the security of Sabah and Sarawak.

“So I request that this matter be discussed and debated in this House immediately and should not be underestimated or delayed any longer,” she said.

Azhar said he has yet to review the motion as it was only sent at 11.30 this morning after the sitting started.