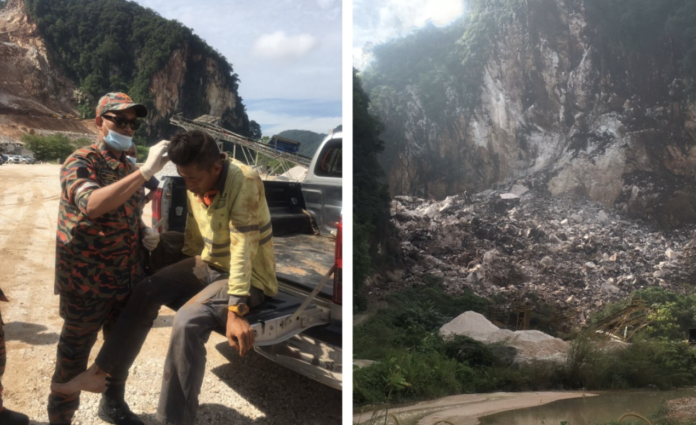 IPOH, March 8   — Two men were injured and another two were reported missing in a quarry rockfall incident in the Tambun area, Simpang Pulai this morning.

Perak Fire and Rescue Department (JBPM) in a statement said they received a distress call at about 9.40 am and a team from the Simpang Pulai JBPM was deployed to the scene.

“When the team arrived at the location, the quarry manager said four people including two Orang Asli were involved in the rockfall.

“According to an early report by the operations commander, two victims managed to escape (with injuries) in the incident. However, another two victims are suspected to be buried in the rumble,” it said.

The statement said that the Special Tactical Operation and Rescue Team of Malaysia (STORM) has been asked to assist in the search of the missing victims. The rescue operation is ongoing.

At the scene, Bernama found rescuers conducting search and rescue operations while the two injured victims, aged in their 40s to 50s, were given immediate medical attention,

The Department of Mineral and Geoscience Malaysia is also conducting a risk assessment at the site.

Startups not excluded by MOSTI for assistance, financing – Dr Adham