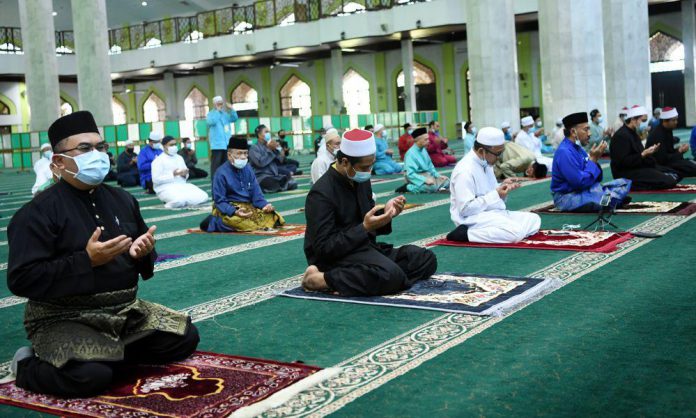 KUALA LUMPUR, March 9 — Congregational prayer activities in mosques and surau that can be performed without physical distancing during the ‘Transition to Endemic’ phase which begins April 1, is yet to be discussed in most states.

“A meeting to determine the matter has not yet been held,” he said.

In PERAK, Perak Islamic Religious Department (JAIPk) director Datuk Mohd Yusop Husin said discussions on the matter would be held in the near future, and the decisions made would be announced later.

In PENANG, the president of the Penang Islamic Religious Council (MAINPP), Datuk Ir Ahmad Zakiyuddin Abdul Rahman, who is also the Deputy Chief Minister of Penang said although discussions had not yet been held, the council was, in principle, ready to follow the recommendation.

“We have not yet made a decision on activities at mosques and surau without physical distancing, but in principle, if that (the proposal) is recommended, we will follow the lead,” he said.

In TERENGGANU, state Human Development, Dakwah and Information Committee chairman Mohd Nor Hamzah said the decision on removing physical distancing requirement for congregational prayers in all mosques and surau in the state had not been decided, stressing that it could only be determined with the consent of the Sultan of Terengganu Sultan Mizan Zainal Abidin.

In PERLIS, Perlis Islamic Religious Affairs Committee chairman Ruzaini Rais said the state government was awaiting the consent of the Raja of Perlis Tuanku Syed Sirajuddin Jamalullail regarding the matter.

In SARAWAK, the minister in charge of Islamic affairs Datuk Dr Abdul Rahman Junaidi said the ruling on congregational prayers without physical distancing had not yet been discussed by the Sarawak Islamic Council (MIS).

He said for now, the standard operating procedure (SOP) regarding prayer activities at mosques and surau in Sarawak issued by MIS effective Jan 7, was still in effect.

Meanwhile, in PAHANG, Pahang Islamic Religious and Malay Customs Council (MUIP) chief executive officer Datuk Ahmad Hairi Hussain when contacted informed that the matter had been discussed, and the details would be made known to the public no later than next week.

Prime Minister Datuk Seri Ismail Sabri Yaakob yesterday announced that congregational prayer activities in mosques and surau, as well as prayer ceremonies in non-Muslim houses of worship, could be carried out without physical distancing during the ‘Transition to Endemic’ Phase, which begins April 1.

Ismail Sabri said, however, its implementation and final SOP for mosques or surau were subject to the decision of the respective state religious authorities.