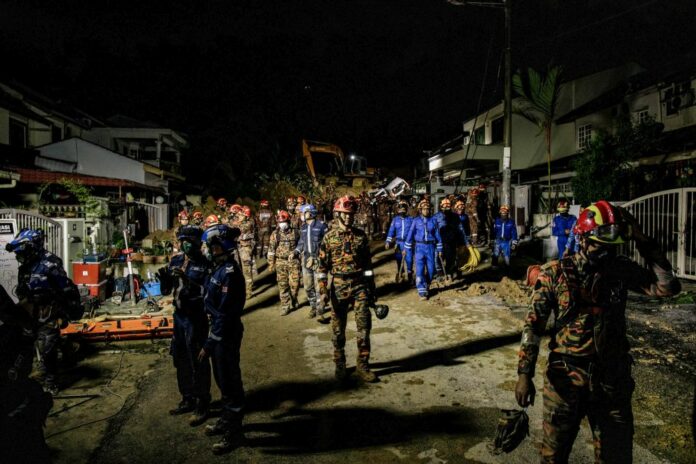 KUALA LUMPUR, March 11 — A landslide in Taman Bukit Permai, Ampang near here yesterday evening claimed four lives while another victim escaped with light injuries in an incident that also affected 15 homes and 10 vehicles.

The search and rescue (SAR) operation for the five victims began as soon as nine firemen from the Pandan Fire and Rescue station arrived at the scene after receiving a distress call at 5.54 pm.

About an hour and a half after that, at 10.58 pm, the body of the third victim, a male resident, was extricated from the debris.

The SAR operation ended at 2 am after Ampang Jaya district police chief ACP Mohamad Farouk Eshak confirmed that rescuers had found the bodies of the last two victims, both males, one of whom was a worker of Pengurusan Air Selangor Sdn Bhd (Air Selangor).

Selangor Fire and Rescue Department director Norazam Khamis, however, said they would use K9 Unit tracker dogs at the site of the landslide to ensure there are no other victims involved.

All of the victims who were brought to Ampang Hospital have yet to be identified.

A temporary relief centre was also opened at the Ampang Jaya Municipal Council (MPAJ) hall in Taman Mega Jaya, but checks by Bernama found that no residents from the affected area have moved there as of 3 am.

During the incident, residents in the area heard a loud bang caused by two landslides that occurred in succession during heavy rain. The incident was also caught on camera as it happened by residents.

The Malaysian Meteorological Department (METMalaysia), prior to this, had forecast heavy evening showers until March 14.

The landslide incident also caught the attention of Prime Minister Datuk Seri Ismail Sabri Yaakob, who in a brief Facebook message, expressed his sadness over the tragedy and asked the public to pray that all victims will be found safe.

GE15: PAS ready to be opposition if unable to secure simple...