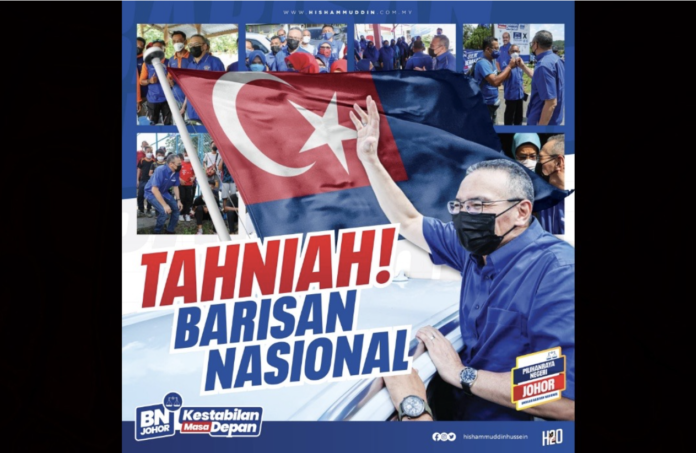 KUALA LUMPUR, March 12 — Several top leaders from Barisan Nasional (BN) have reminded the winning candidates from the coalition in the Johor State Election to uphold the people’s mandate.

UMNO vice-president Datuk Seri Hishammuddin Tun Hussein in a post on his Facebook tonight said BN candidates who won must carry out their duties sincerely, honestly and earnestly for the benefit of the people of Johor.

“To all the BN candidates who have won, the trust of the people of Johor is now on their shoulders. This is not a time to rejoice. Prove that the #KestabilanMasaDepan (Future Stability slogan) that we shouted throughout the campaign is not an empty promise.

“Make the politics of charity and devotion that YAB Datuk Hasni (Johor Menteri Besar Datuk Hasni Mohamad) emphasises as the basis,” said Hishammuddin, who also thanked the people of Johor who chose BN.

Wanita BN chairman and Wanita UMNO chief Datuk Seri Dr Noraini Ahmad said BN would respond to the two-thirds majority victory handed by the people with a leadership that would ensure Johor remains a distinguished state.

She also expressed her appreciation to the voters who showed their belief in BN women candidates this time.

“Our hope to provide future stability to Johor has finally become a reality.

“Congratulations to all in the BN machinery who worked hard during the campaign period in the Johor polls,” she said via a post on Facebook.

MIC deputy president Datuk Seri M. Saravanan, who is also Human Resources Minister, said BN would keep its promise to build a strong government for the future stability and prosperity of Johor.

Through his post on Facebook, he thanked the people of Johor for their support and confidence in giving the mandate to BN to lead the state government.