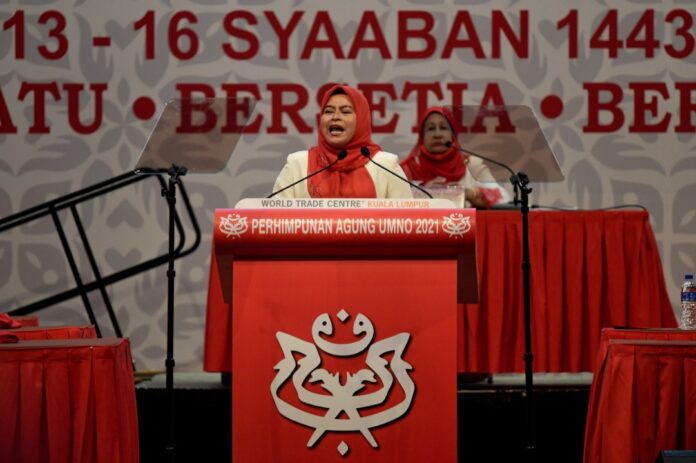 She said the five key thrusts were to face the 15th General Election (GE15) which was approaching and to ensure that the leadership, machinery and party members were fully prepared.

“Maybe this assembly is the last one before we enter the battlefield. When the war slogan is sounded, Wanita UMNO is ready to fight on the election battlefield,” she said when delivering the policy speech at the Wanita wing assembly here today which was attended by 954 delegates from 191 divisions.

In the meantime, Noraini said the Memorandum of Understanding (MoU) on Transformation and Political Stability signed between the government and the opposition should be taken into account in making decisions related to GE15.

She also expressed hope that the percentage of women candidates in GE15 will be increased to 30 per cent as promised by the previous leadership even though in the recent Johor polls, Barisan Nasional (BN) fielded 25 per cent women candidates.

“In GE14, BN women candidates only represented 11.7 per cent of the total candidates fielded. We are grateful to the president because, in the Johor polls, BN fielded 25 per cent women candidates, but we hope for GE15, we will reach 30 per cent,” she said.

Noraini, who is also Parit Sulong member of Parliament, suggested that the MyKasih Kapital target of 5,000 people, tabled in the 2022 Budget, be increased to help more women generate income as the number of single mothers in the country has reached one million people.

“With the target of 5,000 participants, it barely helps many women who lost their jobs and livelihoods due to the COVID-19 pandemic. This does not include women from B40 and M40 families who also need additional sources of income to help their families,” she said.

Meanwhile, Noraini, who is also the Minister of Higher Education, said efforts to raise the level of the country’s higher education have been and are being carried out through the National TVET Council (MTVET) so that TVET is no longer viewed as second class education.

Noraini also expressed her appreciation to the government for allowing the special Employees Provident Fund (EPF) withdrawal of RM10,000 as announced by the Prime Minister yesterday.

“I would like to thank the Prime Minister who is so concerned with the people’s problems, as it gives a great relief to the people who are trying to get back on their feet again,” she said.

My tweet to stay at home just a reminder, nothing more,...