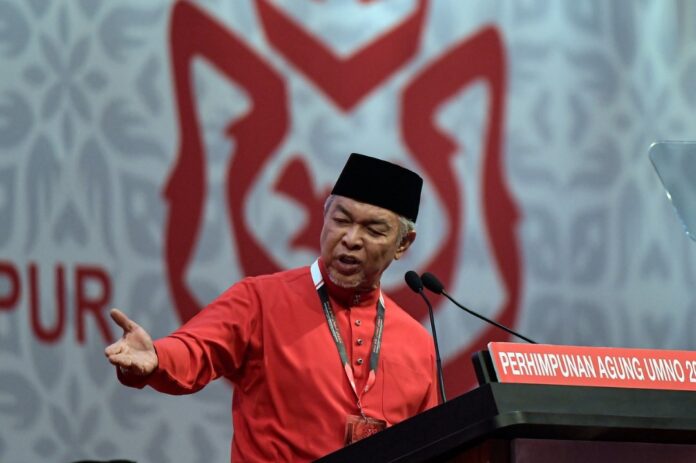 “The fourth is continuing the education integration agenda so that the worldly and spiritual sides move in tandem, while the fifth is the reform agenda for the people, which is necessary to regain public confidence in the government.”

Therefore, he said, this General Assembly should be listening to the voice of the grassroots that are asking for a new mandate through the 15th General Election.

“For this purpose, I hope we go back to the people. Leave it to them to give a new mandate to UMNO. While the people still love us, let’s welcome that love. Don’t pine for that love after it is lost. The more we postpone it, the more people will suffer and the more damaging for the country,” he added.

On the political memorandum of understanding (MoU) signed between the government and the opposition, Ahmad Zahid who is also the Member of Parliament for Bagan Datuk, felt that it could be a strategy by the opposition to weaken the party.

“When they agreed to sign the MoU, it meant that they had something devious. I believe that they accepted us as they knew it was the way to kill us off.

“Actually, they’ve never loved us. Read the constitution of each of the opposition parties. Be aware. Be careful. You are sleeping with your enemies. They keep a dagger under the blanket. So, do we still want to continue the MoU? he said.

Ahmad Zahid said the party, therefore, left the matter to the wisdom of the Prime Minister and UMNO vice-president, Datuk Seri Ismail Sabri Yaakob to make a decision on the direction of the MoU.

“UMNO as a party which upholds the Federal Constitution also understands that the power in deciding to dissolve Parliament is with the Prime Minister.

“He will be handling the matter by asking for the consent of the Yang di-Pertuan Agong. We don’t want to disturb this but UMNO a responsible party, has the power to determine its own direction,” he added.

With PdPR being implemented again, some parents worried about children’s education