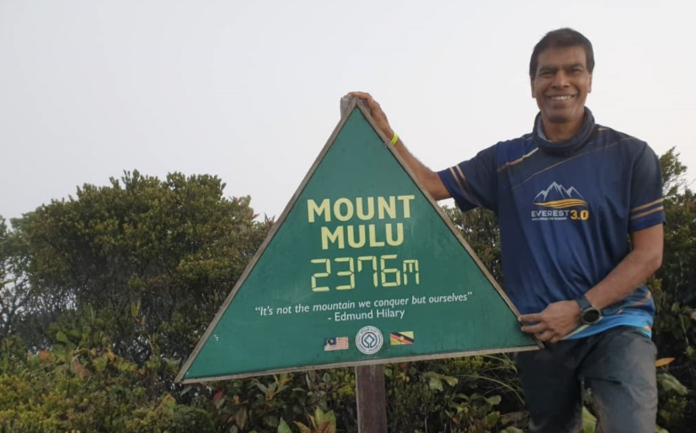 KUALA LUMPUR, March 19 — Former United States track and field legend Jacqueline Joyner-Kersee once said: “Age is no barrier. It’s a limitation you put on your mind.”

These words of the three-time Olympic gold medallist are firmly etched in the mind of Malaysian mountaineer N. Elanghovan, fondly known as Elango, who, at the age of 64, will attempt to scale the majestic Mount Everest in two months’ time.

He is set to become among the oldest Malaysians to reach the top of the world.

As of now, only about two dozen Malaysians have successfully scaled Everest, which stands 8,849 metres high.

“Age is not a factor. It’s the mind that we need to conquer. We need to have a positive mindset in order to achieve our goals, no matter how small or big they are. I believe I can achieve my life-long dream,” Elango told Bernama.

Born and raised in Cameron Highlands, walking on hilly terraces and jungles runs in Elango’s blood since young, as does his love for Mother Nature.

“We used to go out to cut wood and walk in the forests and mountains in Cameron Highlands, so I am used to hiking and related activities. Forests and jungles are like a second home to me and I always respect every hill and mountain I climb, no matter how small or big.

“Coming from Cameron Highlands, a rural community, I could not achieve many things when I was younger. But after going through life, I wanted to achieve bigger things,” said the former Tenaga Nasional Berhad (TNB) employee, who took optional retirement seven years ago to focus on mountaineering.

Elango is a member of the ‘Keluarga Malaysia-Everest Expedition 2022’ led by two-time Everest climber T. Ravichandran, 57. Along with Sarawakian Oisin Jangin Bagly, 25, and Sabahan Adelinah Lintanga, 35, they will leave for Kathmandu, Nepal, on March 25, before proceeding to Lukla a few days later.

Elango said the team is expected to arrive at the Everest Base Camp (EBC) in early April, after a nine-day hike from Lukla, to conduct technical training and acclimatisation to the high altitude and extreme weather conditions, before attempting the assault on the summit during the May window.

Ravichandran, who is prominently known as Ravi Everest after having climbed the world’s highest mountain from both the popular South Face in Nepal and North Face in Tibet, believes in Elango’s ability.

“I trust and believe in Elanghovan’s ability to achieve his dream based on his performance during previous hikes and training together. He has performed very well during training, with his maturity, readiness and calmness. I think he will do much better than what we all did on our first trip.

“I hope the whole group of Malaysians will stand on the summit together and return home safely. Upon returning, I hope we will contribute at least six months of our time to society, to inspire underprivileged people into achieving greater heights as we have promised,” he said.

Elango had planned to conquer Everest in 2020 after having prepared physically and mentally but due to the COVID-19 pandemic, he had to wait patiently for two years to pursue his dream.

Melaka Zoo to be restructured if unable to resume operations