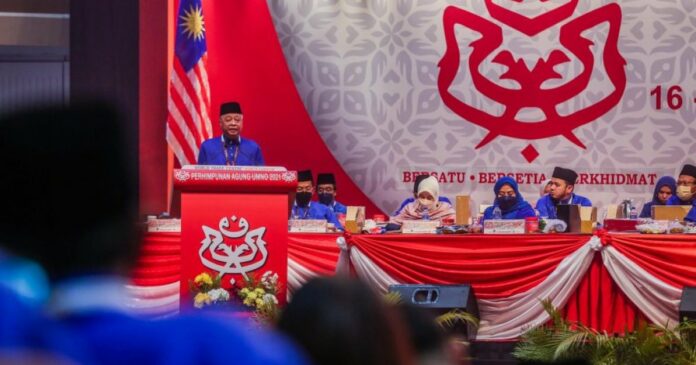 The prime minister’s winding-up speech in his capacity as UMNO vice-president was punctuated by applause, and he also received a ‘standing ovation’ when he made an announcement pertaining to the 15th general election (GE15).

The strong support for the Prime Minister was clearly evident from the spontaneous reaction received from the floor, dispelling ‘speculative talk’ about his relationship with several of the party’s ‘Top Five’ leaders.

Akin to the Malay idiom that those under threat come together, the unity among the UMNO leaders was evident with the numerous fist bumps shared at the end of Ismail Sabri’s speech that reflected compatibility and putting to rest claims there was disagreement within the UMNO leadership.

All issues raised by the delegates, including holding party elections after GE15, cost of living, education, the Malay language and the COVID-19 pandemic as well those raised prior including minimum wage, the death of fireman Muhammad Adib Mohd Kassim, the demands of the Sultan of Sulu and investigations into former Attorney-General Tan Sri Tommy Thomas – were all answered by the Prime Minister.

On GE15, Ismail Sabri, speaking for the first time in the assembly as vice-president and prime minister, gave the assurance that the matter of dissolving Parliament will be discussed among the ‘Top Five’, saying that such a decision would not be delayed any longer than it should once UMNO was confident of winning it.

Both also agreed to leave the decision on GE15 to the Prime Minister prior to obtaining consent from the Yang di-Pertuan Agong.

Concerns that there will be cracks within if party elections were to be held before GE15 was also put to rest after the assembly today approved the motion to delay party elections to six months after the general election was announced.

Among other good news announced by Ismail Sabri were the decision to allow recently-widowed women to work from home during their ‘edah’ period (four months and 10 days) and the freezing of ex-husbands’ bank accounts if they failed to pay alimony.

Understanding the plight and sufferings of the people, the announcement on the RM1,500 monthly minimum wage effective May 1 would have been music to the ears of the country’s labour force.

The party vice-president also touched on the economy when he announced a new investment of RM32 billion from DRB-Hicom Bhd to develop the Automotive High-Technology Valley in Proton City, Tanjung Malim, Perak that would create 370,000 jobs during the development phase and 161,000 during the operational phase.

Efforts to uphold the Malay language were also touched upon with the announcement that the government will amend the Dewan Bahasa dan Pustaka (DBP) Act 1959 to allow DBP to take action against any violation of Bahasa Melayu usage, including at the district level.

The general assembly this time, held physically, was attended by 5,571 delegates compared to the hybrid method last year while there was no assembly meeting held in 2020 due to the COVID-19 pandemic.