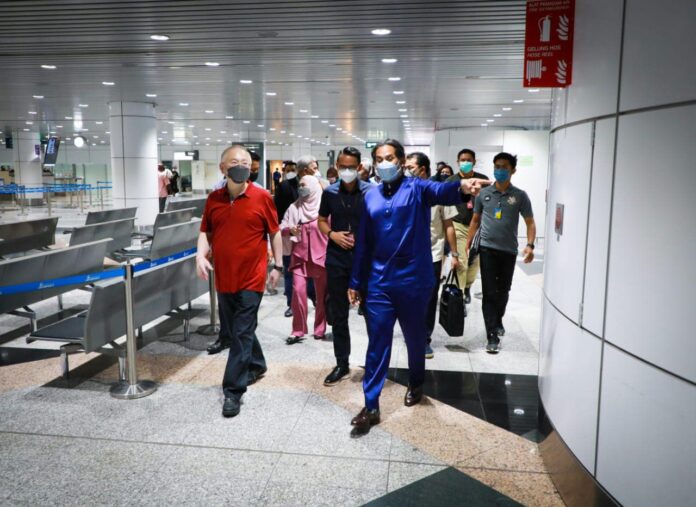 SEPANG, March 19 — Malaysia is preparing a protocol for travellers in conjunction with the reopening of the country’s borders on April 1 towards making it a safe destination as well as avoiding congestion at international gateways, said Health Minister Khairy Jamaluddin.

He said among others, the protocol will require travellers to download the MySejahtera application, upload the real-time Reverse Transcription Polymerase Chain Reaction (RT-PCR) test results before departure and fill in pre-release forms.

“Travellers will need to fill many pre-release forms,” he said, adding that travellers will get a traveller card in the MySejahtera application when all the conditions are met to be allowed to board the plane.

Khairy said this at a press conference with Transport Minister Datuk Seri Dr Wee Ka Siong today after inspecting the preparedness at the Kuala Lumpur International Airport (KLIA) here in conjunction with the reopening of the country’s borders.

On arrival in Malaysia, travellers need to do the Rapid Test Kit-Antigen (RTK-Ag) within 24 hours whether, at the airport or clinic at their own costs, he said.

Khairy said the COVID-19 breath test method was also available at KLIA for travellers who wished to complete test screening at the airport.

“The breath test has been approved by the Health Ministry (MOH) and after tests showed it to be accurate and its sensitivity satisfactory.

Khairy said the protocol will help to lessen the time between disembarkation (from the plane) to departure from the airport to between 35 and 45 minutes, compared to before which took more than an hour.

He said the government’s aim in reopening borders is safe and does not include bureaucracy such as wearing a digital tracker.

“Starting April 1, Malaysia will reopen its borders to the world and this will help the country’s development and economic recovery as the tourism sector contributes more than 15 per cent to the country’s gross domestic product (GDP), including business travellers,” he also said.

Meanwhile, Wee said the Civil Aviation Authority of Malaysia (CAAM) will direct all airlines companies to inform their passengers regarding the pre-conditions before boarding flights.

“This will help to avoid congestion at the arrival hall,” he added.