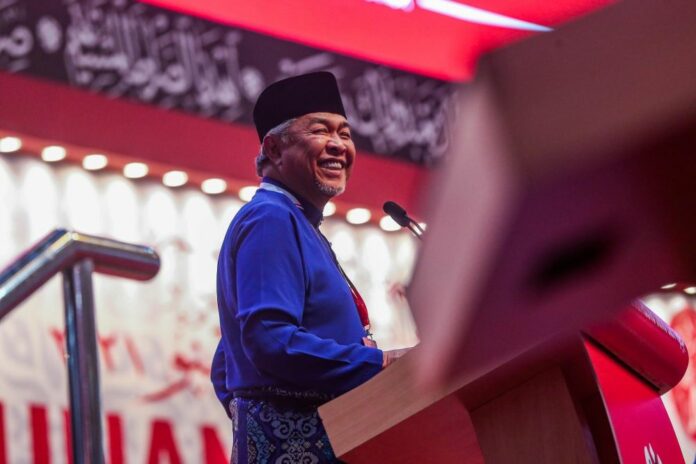 KUALA LUMPUR, March 19 — UMNO is determined to be a ‘game changer’ in the country’s political landscape to ensure the party remains relevant and continues to enjoy the support of the people, including the younger generation.

Addressing about 2,600 delegates at the 2021 UMNO general assembly here today, party president Datuk Seri Dr Ahmad Zahid Hamidi this would require changes in the party’s approach that would enable UMNO and Barisan Nasional (BN) to return as the dominant party in the government.

“We must change the (old) characters as Malays have become more educated and open-minded, and are looking to UMNO and BN to govern and be dominant again in the 15th general election (GE15) and beyond.

“They are counting on us and if do not change our mindset, we will be perceived as not having changed, and if we do not change, there are concerns we will fall.

“Looking at this situation, I feel whatever that we do, we have to think not of ourselves alone, but several game-changing approaches that the people are waiting for,” he said in his winding-up speech.

To ensure a two-thirds majority win similar to the ones achieved in the Melaka and Johor state elections, Ahmad Zahid, who is also BN chairman, said the party will field 70 percent new faces among its candidates in GE15.

Ahmad Zahid also gave the assurance that party members aged 50 and below will be selected as candidates if they met the ‘WALI’ criteria set, which stands for winnable, acceptable and likeable.

“To division chiefs, do not worry… those 50 and below, if you meet the WALI concept, insya-Allah you will be included. Do not worry, Pemuda (Youth), Puteri and Wanita (Women’s) insya-Allah, our team will ensure all three wings are given the opportunity (seats).

“I am asking all delegates to be with me to see this ‘game changer’ (approach) is done, although not easy, I am confident this can be done,” he said to thunderous applause from the floor.

On the statement by Prime Minister Datuk Seri Ismail Sabri Yaakob, who is also UMNO vice-president, that the matter of dissolving Parliament will be discussed with the party leadership, Ahmad Zahid said that somewhat suggested that this party assembly could possibly be the last one (before GE15 is called).

“What was mentioned by the PM earlier, I am no soothsayer but I am confident with that announcement, Insya-Allah, this could possibly be the last UMNO general assembly before the general election is held, and so, let us all pray to Allah SWT,” he said before reciting a prayer.

Ahmad Zahid, who is Bagan Datuk MP, also expressed his appreciation to former Johor Menteri Besar Datuk Seri Hasni Mohammad, describing him as big-hearted and one who has contributed immensely to the party.

The general assembly ended today after sitting for four days starting Wednesday with the opening of the Women, Youth and Puteri assemblies followed by the full meetings of the three wings the next day.

This was followed by the opening of the general assembly by Ahmad Zahid yesterday and debates on the president’s policy speech.

Silat a treasured heritage that must be preserved – Reezal Merican