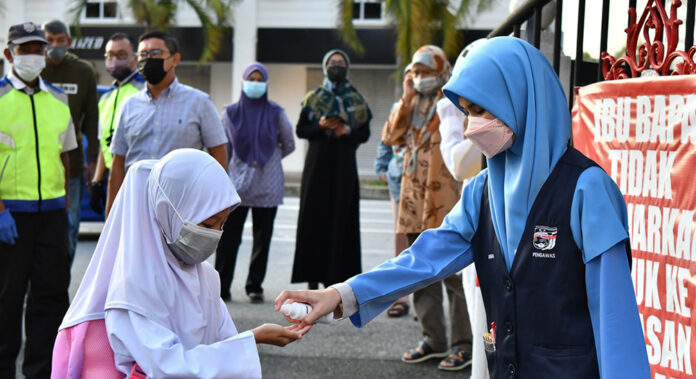 KUALA LUMPUR, March 21 — The 2022/2023 school session, which starts today is certainly awaited not only by parents, but also the students themselves who are excited to be able to start face-to-face learning again as nothing beats the feeling of studying in a physical classroom.

A survey by Bernama found that most schools set strict standard operating procedures (SOPs) for parents and students, including on physical distancing and the use of hand sanitiser before entering the classroom to curb the spread of COVID-19.

At Sekolah Kebangsaan (SK) Bandar Utama Damansara 4 here, parents are only allowed to send their children up to the gate according to the SOP set by the school.

Hany Zainal, 35, when met after sending his son, Shakur Zeyn Shahrir, 7, said he was satisfied with the SOP implemented at the school.

“Today, 238 primary schools and 77 secondary schools in Melaka are open for their new year school session with those having an enrolment of more than 600 students to implement the rotation system.

In JOHOR BAHRU, a check by Bernama at SK (P) Sultan Ibrahim saw students arriving as early as 6.30 and they were given face mask and welcomed to the school by Mickey Mouse, making the first day at school more lively and cheerful.

President of the school’s Parents-Teachers Association (PTA), Mohd Hyffny Isa said no parents had raised concern over their children’s health safety at the school and that all the teachers and staff had completed their COVID-19 vaccination and also received the booster dose.

In SELANGOR, a woman shared her daughter’s excitement to begin school.

Her daughter, Wan Alesha Medina Wan Fathi Amir, is one of the Year One students at SK Bukit Kemuning 2, Shah Alam.

“She is a very friendly person and like to make friends. I have no worries about her and believe she can adapt herself with new friends,” said Nurul Aida Shahrol, 37.

In KELANTAN, Rosmalaili Abdul Rahman, 44, said she was confident in the ability of her daughter’s school, to prevent the spread of COVID-19 based on the implementation of the stipulated SOP.

“The government’s action in reopening the schools for face-to-face learning and teaching is a right move with the country moving into the endemic phase. So, we have to be prepared for the situation,” she said when met after sending her daughter, Ahya Deena Asmazawawi, 11, to Sekolah Rendah Agama Tengku Amalin A’Ishah Putri, in Kota Bharu.

In PENANG, checks found that at SK Permatang Bertam, Kepala Batas, the drive-through concept for parents sending their children to the school is one of the SOPs implemented.

On arrival, students are also required to queue to scan their body temperature and then use hand sanitiser before entering their classroom.

He said all schools that were affected by the floods last month had been cleaned and were in operation today.

In PAHANG, a total of 255,251 primary and secondary school students began their new school session today.

Meanwhile, a private sector employee, Faizal Ahmad, 39, said it was a different experience for him when sending his youngest child, Puteri Adzra Firzanisa, who is in Year One at SK (LKTP) Bukit Goh, Kuantan.

“Unlike her older siblings, I was able to send them to their classrooms, but with the SOPs implemented now, it is only to the school gate, but I’m happy to receive a picture of my daughter in her classroom which was sent by her teacher through WhatsApp,” he said.

In PERLIS, State Education director Naharudeen Othman said 64 primary schools recorded full attendance of their students, with 10 of the schools, which have an enrolment of more than 600 students, implementing the rotation system.

In KEDAH, checks by Bernama at several schools in Alor Setar noticed the students excited to be back at school, especially the Year One students.

Mashitah Abu Bakar, 63, said she went to send her grandchild Aufia Media Nasir, 7, to SK Buluh Lima as both her parents had to go to work.

However, it is not a problem because the school is nor far from the house, she said.

China’s new development opens up new opportunities for the world