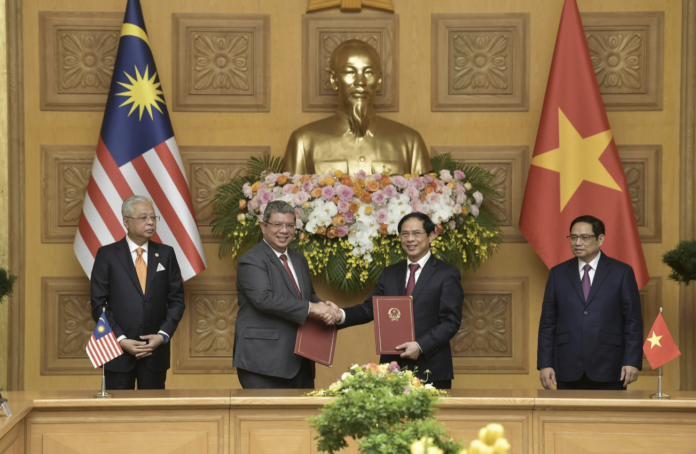 At a ceremony at the Government Office here, the two leaders witnessed exchanges of documents on various types of cooperation which had been signed earlier.

Foreign Minister Datuk Seri Saifuddin Abdullah exchanged a letter of intent on cooperation in diplomatic training with his Vietnamese counterpart Bui Thanh Son, while a similar exchange of documents was held with Vietnam’s Labour Minister Dao Ngoc Dung on the recruitment and repatriation of workers.

The two prime ministers had earlier led their delegations in a meeting where they discussed cooperation in trade and economy, regional and international issues as well as efforts to enhance bilateral ties.

Ismail Sabri spoke in Bahasa Melayu throughout the meeting which lasted almost two hours, and it was translated into English.

The two leaders and their delegations then attended lunch which was hosted by Chinh at Government Office.

Ismail Sabri, who is on a two-day official visit to Vietnam, was given a red carpet welcome at the Presidential Palace here this morning where he was greeted on arrival by Chinh.

In the afternoon, the prime minister was scheduled to call on Vietnam President Nguyen Xuan Phuc, followed by meetings with Communist Party of Vietnam general secretary Nguyen Phu Trong and Chairman of the National Assembly Vuong Dinh Hue.

The prime minister is making his maiden visit to Vietnam at the invitation of Chinh.

Ismail Sabri, who arrived yesterday, is scheduled to return to Kuala Lumpur tomorrow morning after holding a press conference for Malaysian journalists.

GOVT ANNOUNCES ADDITIONAL ECONOMIC SECTORS THAT CAN OPERATE DURING MCO