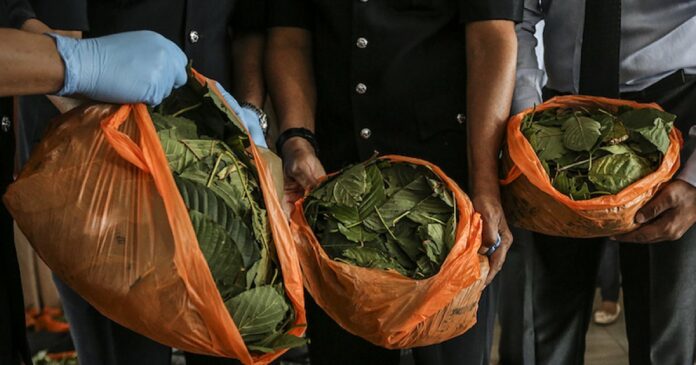 ALOR SETAR, March 21 — The federal government has been asked to place ketum cultivation under the Dangerous Drugs Act 1952 if the plants are found to bring more harm than good.

Datuk Norsabrina Mohd Noor (BN-Bandar Baharu) said the crop was widely grown in the state, however, because it was placed under the Poisons Act 1952, no enforcement action could be taken against individuals who cultivate it.

“Based on the data of ketum farming in Kedah, I have just got to know that in the Sik district there are 3,030 ketum trees and Langkawi has about 670 trees.  In Baling there are 1,000 trees, but what shocked me the most is that in Pendang there are 30,000 trees.

She said this when debating the motion of thanks for the royal address by the Sultan of Kedah, Sultan Sallehuddin Sultan Badlishah at the state legislative assembly sitting here today.

According to Norsabrina, the government needs to have a specific plan for the crop and determines if it can bring benefits or otherwise.

Mohd Radzi Md Amin (PN-Pedu) also raised the issue and expressed his support for the recent proposal by Kedah Menteri Besar Datuk Seri Muhammad Sanusi Md Nor (PN-Jeneri) suggesting that the federal government should allow ketum to be exported especially to Thailand.

However, Datuk Dr Ismail Salleh (PH-Pengkalan Kundor) who interrupted Mohd Radzi’s debate said the ketum leaves issue was related to its misuse involving not only adults but also school-going students, adding that if the government allows the export of ketum leaves, the law on ketum would be eased which would encourage more people to abuse it.