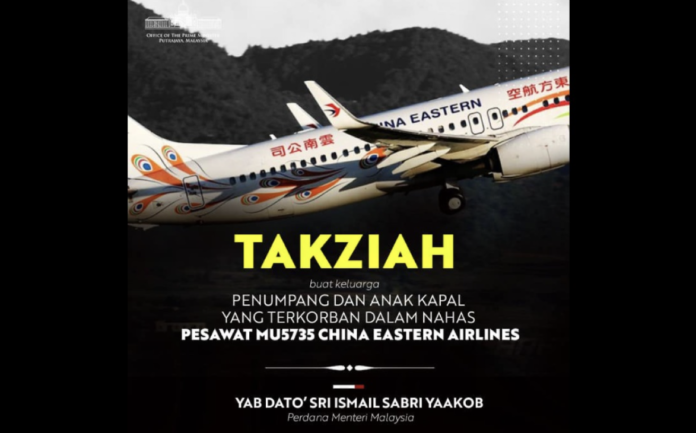 KUALA LUMPUR, March 22 — Prime Minister Datuk Seri Ismail Sabri Yaakob has expressed his condolences to the government of China on the tragedy of the Boeing 737-800 passenger plane belonging to China Eastern Airlines that crashed yesterday.

In a post on his Facebook page, he also expressed his condolences to the families of the victims and hoped they would remain strong in facing the situation.

“I was saddened when I received news about a Boeing 737-800 passenger plane belonging to China Eastern Airlines that crashed, killing 132 passengers and crew in Guangxi province, China, yesterday.

“I, and the entire Keluarga Malaysia (Malaysian Family), express our deepest condolences to the government of China and the families of the victims,” he said.

According to media reports, a passenger plane with 132 people aboard crashed in south China’s Guangxi Zhuang Autonomous Region on Monday afternoon.

The Boeing 737 aircraft, which departed from Kunming and was bound for Guangzhou, crashed into a mountainous area near the Molang village in Tengxian County in the city of Wuzhou at 2.38 pm, causing a mountain fire.

Wisma Putra, in a statement today, said so far there was no report of any Malaysian involved in the tragic crash.