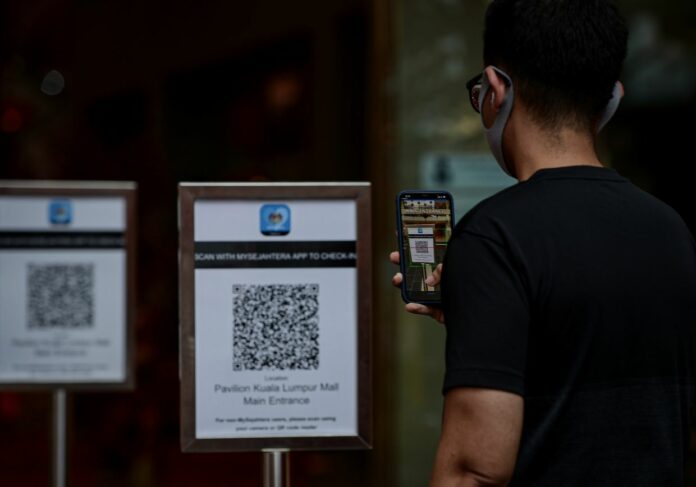 PUTRAJAYA, March 30 — The requirement for using the MySejahtera application as a standard operating procedure (SOP) for check-ins may be scrapped.

He said the decision whether to continue or scrap the check-in via the MySejahtera application would be determined based on the COVID-19 infection trend as well as the mobility data of residents and travellers when the country’s borders reopen on April 1.

“A decision on this matter will take almost a month because we need to look at this trend.

“If there are not many changes to the infection trend, we may drop the check-in function,” he told reporters after officiating the closing ceremony of the National Integrated Weight Management Programme and World Physical Activity Day 2022 here today.

Khair said this when asked to comment on a statement by the Malaysian Medical Association (MMA) that it was time to scrap the practice of having to scan the MySejahtera application for check-ins as the country transitions into the endemic phase from April 1.

The government had previously dropped the SOP related to temperature checks and manual recording of personal particulars for entry into premises on Feb 11.

On the issue of the MySejahtera application ownership, Khairy said the Ministry of Health (MOH) expects to finalise negotiations with the company that operates the application software platform in about a month’s time.

“The negotiation process is going on. But it is taking some time because it is quite technical,” he said, adding that he would provide an explanation on the matter at the Dewan Negara tomorrow.

The negotiations are being held after the MOH set up a price negotiation committee last year aimed as negotiating the procurement price and management of MySejahtera application services with the company for a period of two years, in line with the government’s procurement procedures, he said.

He said the procurement had been agreed upon by the Ministry of Finance on Feb 28 and now the negotiation process has started to ensure due diligence is carried out as well as to protect the government’s interests.

Khairy had earlier stressed that the government never sold the MySejahtera application to any private company and it is owned by the government.