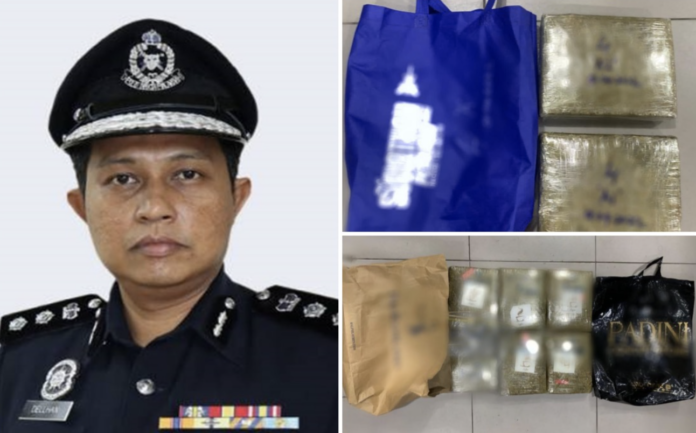 KUALA LUMPUR, April 2 — Police arrested eight locals, including a couple, yesterday on suspicion of drug trafficking in the Klang Valley, and seized nearly 7.5 kg of cannabis estimated to be worth RM41,550.

He said the first arrest was a married couple as a result of a raid by the roadside of Jalan Robertson, Bukit Bintang at 4.10 pm where police seized 1,893 grams of cannabis.

He said an interrogation of the couple led to the arrest of five men and a woman in two raids around the Klang Valley and a seizure of 5,588 gms of cannabis.

“This syndicate is believed to be involved in the distribution of cannabis for the market around the Klang Valley and is believed to have been active since November last year,” he said in a statement here tonight.

He said an initial urine screening of all the suspects found one of them positive for amphetamine and methamphetamine and was investigated under Section 15 (1) of the Dangerous Drugs Act 1952.

Noor Dellhan said the total drugs seizure could be used by a total of 14,962 addicts.

“The case is being investigated under Section 39B of the Dangerous Drugs Act 1985 and all suspects were remanded under Section 117 of the Criminal Procedure Code for seven days starting today (April 2) to April 8 (next Friday),” he said.

He advised the public not to get involved in drug trafficking or addiction and to channel any information on drugs and criminal activities to the Dang Wangi District Police Office at 03-26002222 or the Kuala Lumpur Police Hotline at 03-221159999 or any nearby police station.