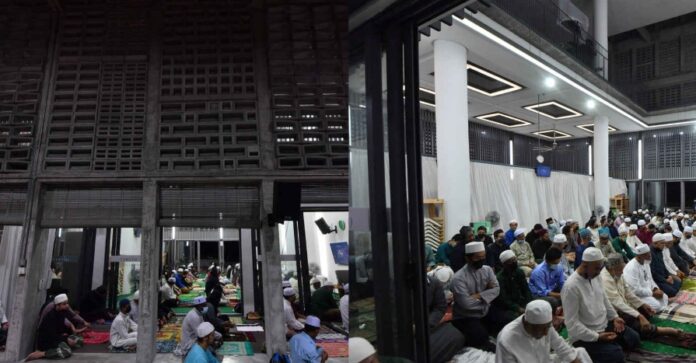 KUALA LUMPUR, April 6 — Walking along Jalan Sungai Penchala in Segambut here, one will not miss  a gray building with a green landscape.

At a glance, the cube-shaped building with ventilation concrete blocks as it walls is like an office building, but it is actually a surau known as Musalla Al Abrar.

Hafiz Ismail, 48, the architect responsible for designing the surau, said Musalla Al Abrar was inspired by the structure of the sacred building, the Kaaba at the Grand Mosque in Makkah.

“I was inspired by the shape of the Kaaba which attracts millions of Muslims from all over the world every year to go to, ”he told Bernama recently.

The RM3 million Musalla Al Abrar has two prayer halls that can accommodate up to 1,500 congregants at one time, It also has an office space, ablution area, toilet and kitchen.

The surau, under the administration of Yayasan Tawfiq, was completed in 2016 and has become the focus of Muslims not only from nearby areas, but also from outside the Klang Valley, to attend religious activities, including talks.

A graduate of Universiti Teknologi MARA (UiTM) in Shah Alam, Hafiz said that in terms of architectural discipline, ‘tropical brutalism’ was applied to the design of the surau building, with each element having its own advantage and function.

According to him, the word ‘brutalism’ refers to the use of the materials for walls and pillars of the surau  which are 100 percent based on concrete construction and plastered with cement without the use of spray paint and only the floor is painted.

As for the word ‘tropical’, he said, it referred to the landscape of the surau, which is full of greens, to create a peaceful green environment.

Hafiz said the use of ventilation concrete blocks for walls of the surau was aimed at creating natural ventilation for the comfort of the congregation.

“The materials used for the toilet and the ablution area are also not expensive and easy to find,  but they are well-decorated to give them an aesthetic value and make them more attractive, ” he said.

“The construction of this surau is different from other suraus or mosques.  Although it is small, looks extreme and archaic with the ventilation concrete blocks, but once inside the building, it is comfortable with a nice view of the surrounding landscape,” he added.

Syed Hussin said other facilities such as halls, religious schools and a cafe, would be built in the surau compound towards turning it into a dakwah centre.