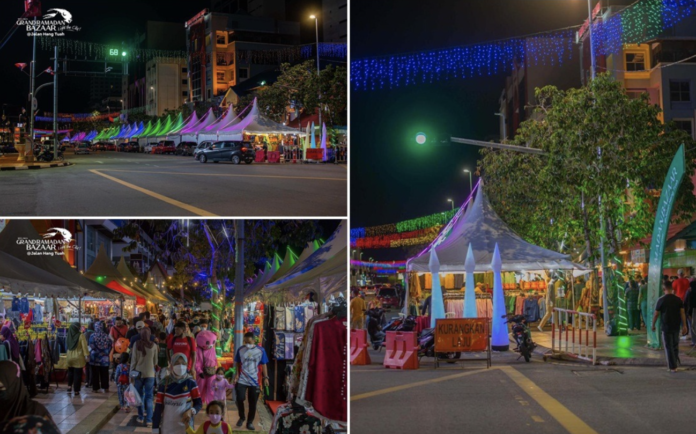 MELAKA, April 10 — A RM100,000 investment to create a bazaar with a Light City concept at Melaka Grand Ramadan Bazar (Melgrad) clearly pays off as it is now the focus of visitors since Ramadan began.

The Melgrad site in Jalan Hang Tuah, which used to be subdued in the past, is now much livelier with more than 200,000 visitors thronging the bazaar in the first week of operation alone.

Its organiser, Muhammad Fikri Mohd Ali said the row of LED lights which were strung around 80 trees was his initiative to revive the Aidilfitri bazaar which was gloomy for a long time due to various issues.

“We gave the bazaar a glamour event touch with a theme. As such we changed the atmosphere of this bazaar by lighting up 128 tents along a 0.5 kilometre stretch by putting up LED lights on the trees here,” he told reporters when met at the bazaar last night.

The bazaar has been losing public interest in the past years as there were not many efforts to lure visitors back but today the fancy lighting is working and Muhammad Fikri believed his target of one million visitors at the end of Ramadan could be met.

“In the first week alone, the bazaar was visited by approximately 200,000 people. We are confident that more visitors will be coming to the bazaar to shop for hari raya items such as clothes, cookies and housing decorations while a list of additional programmes also gave a new atmosphere to the bazaar,” he said.

More interestingly, the Melgrad Bazaar is also the first to offer a lucky draw for visitors who spent a minimum of RM30 for a draw coupon.

“The main prize is a Proton Saga 1.3 AT Premium worth almost RM50,000 which is sponsored by Hang Boba. In addition, other prizes are motorcycles, electrical goods and hotel stay vouchers all worth RM80,000 also awaiting lucky visitors.

“The lucky draw will be performed on the night of April 24,” he said.

“In addition, other attractions to the bazaar included live performances by popular artistes such as Datuk Awie, Siti Nordiana, Azlan Typewriter and several others from Akademi Fantasia.

“We want the bazaar to be successful because the traders will profit. Not the organiser. So, we hope the rebranding of the bazaar will be a win-win formula for all,” he added.