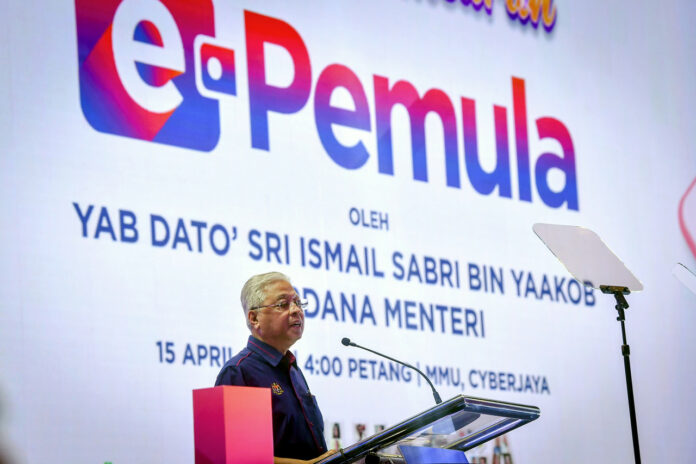 He said the programme would empower and instill the culture of the digital financial system to ensure the inclusive development of all strata of society and business.

“The government is aware the younger generation and digital technology are closely linked.

“Known as digital natives, youths play an important role in mobilising the digitalization agenda of Malaysia,” he said when speaking at the launching of ePermula at Multimedia University here today.

The ePermula programme under Budget 2022 is a e-cash credit incentive of RM150 involving an allocation of RM300 million, is expected to benefit two million youths aged 18 to 20 nationwide.

The process of reviewing the eligibility and claim of credit was open on April 11 and those eligible would receive RM150 in the ewallet of their choice namely BigPay, GrabPay, ShopeePay or Touch ‘n Go eWallet.

He said the government is aware that more entrepreneurs and traders including micro, small and medium enterprises (PMKS) are using e-cash, especially after the COVID-19 pandemic.

“Consumers are also getting more confident with e-cash usage via various eWallets.

In this regard, he urged all entrepreneurs especially PMKS to practise cashless transactions especially in the Transition to Endemic Phase which enables the Malaysian Family to carry out transactions easier faster and safer at physical shops.

In this regard, he hoped eligible youths who received ePermula would spend wisely and use the RM150 credit to support local traders.

He said it was especially for supporting PMKS entrepreneurs so that they could completely recover.

“If more businesses recover, there will be more revenue for the country and more people especially the B40 could be assisted,” he said.

On this, he said apart from financial aid, the government will also implement programmes to empower youths through various other initiatives.

They included the Malaysian Youth Development Academy and the upgrading of several youth and sports complexes while the first regional youth centre in Malaysia would be built to stimulate more programmes and youth activities.

He said for the time being, the government through Budget 2022, at least RM1.2 billion has been allocated for various initiatives to benefit youths including the Malaysian Family Student Device initiative to supply tablets to each B40 student at institutions of higher learning.

“Employers who employ apprentices aged 18 to 30 would be given an incentive of RM900 a month for six months which is an increase from RM800 earlier.

“This is to enable youths to make the recovery agenda in the employment sector a success,” he said.

Apart from that, he said for youths who have an interest in entrepreneurship, the government provides a RM150 million fund for youths through Bank Simpanan Nasional and Agrobank.