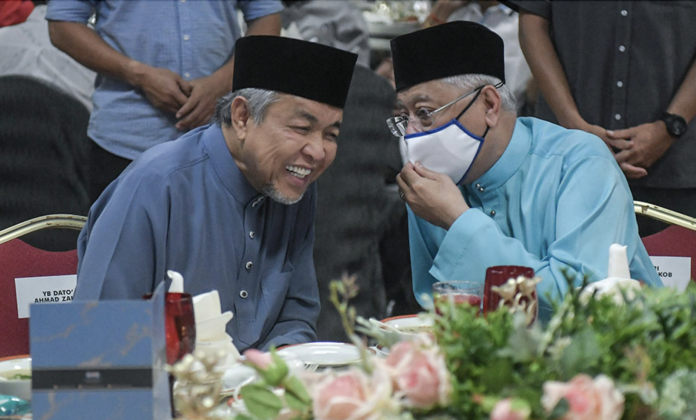 UMNO vice-president Datuk Seri Mahdzir Khalid described it as proof that the party was moving as a team on key issues.

“The SC by consensus and a unanimous vote agreed to support the statement that Ismail Sabri becomes the Prime Minister (if BN wins the GE).

“This proves to the Malaysian community that UMNO is in a team, and the main thing for all individuals in UMNO is to look at the party’s priorities,” he told the media at the UMNO breaking of fast ceremony at the World Trade Centre (WTC) here today.

Prior to that, a closed-door meeting of the party’s SC was held, where, among others, it was decided that vice-president Ismail Sabri would be the Prime Minister candidate for GE15.

The meeting also saw the party continue supporting the tabling of the Anti-Party Hopping Bill, and that it would not compromise with any parties trying to stall the effort.

“If the decision made and its purpose is good and it provides some space and opportunity to Ismail Sabri to continue as PM after the next election, then it is the best,” he said.

Meanwhile, MCA president Datuk Seri Dr Wee Ka Siong said he supported every resolution decided in the SC meeting, including the proposal to nominate Ismail Sabri as Prime Minister in the next GE.

“Looking at Ismail Sabri’s leadership, it is a standout one, and that was the basis for the decision. I definitely support it because we can strengthen politics and the government.

“I am confident that what is more important is to restore the glory of Barisan Nasional (BN). So I think this is a well-received decision and will give a clear direction and show the determination of UMNO and BN to recapture (the government) in the next general election,” he said.

Perak expects to reach phase three of PPN even faster –...

Amendments to Act 514 to protect workers against occupational risks –...