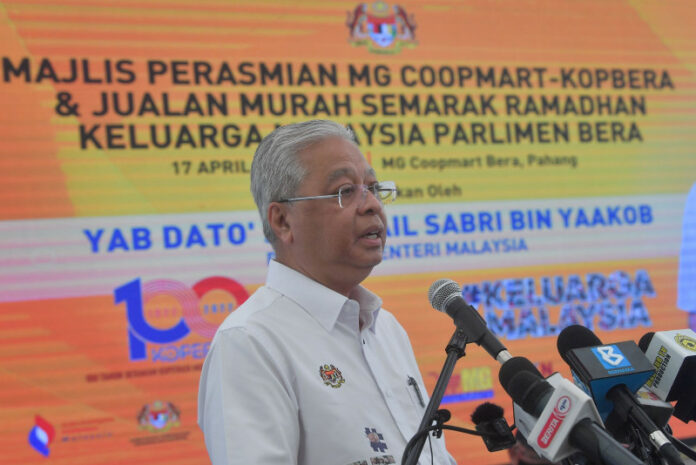 He said based on media reports, the flight fares to both the states during this festive season increased by up to 500 per cent during the festive season and described the increase as “extreme” because the people had no alternative other than to fly.

As such, the Prime Minister said he had asked Domestic Trade and Consumer Affairs (MDTCA)  Minister Datuk Seri Alexander Nanta Linggi to investigate if there was any violation under the Price Control and Anti-Profiteering Act 2011 in the ticket price increase.

“The MDTCA must be firm against any party, no matter big or small company,  that makes excessive profits under the law…immediate action must be taken to safeguard the interests of the people. We will not allow traders to take advantage of the festive season or fasting to pressure the people, ” he said.

Ismail Sabri said he had also asked Transport Minister Datuk Seri Dr Wee Ka Siong to resolve the matter with the airline companies and that  a meeting had been held among the parties involved.

The issue of the costly flight ticket to Sabah and Sarawak became a hot topic this week as the price displayed on the airline’s website was said to have increased up to RM2,000 for return flights, which is an increase of 566 per cent compared to the usual price of about RM300 for the same trip.

In another development, Ismail Sabri said the special committee meeting to address the cost of living, to be held his Friday, would study the proposals by several ministries, especially MDTCA, to ensure no indiscriminate increase in the price of daily necessities.

On the setting up of supermarkets by cooperatives, the Prime Minister said he hoped to see  more cooperatives dominate the retail chain as this would break middleman system and help reduce the price of goods for the benefit of consumers.

He said it could be realised considering the huge number of cooperatives in the country and their close cooperation which enabled to be involved at the production, distribution, wholesale and retail levels.

On the move to reduce eliminate the role of middlemen, the prime minister, who is Bera Member of Parliament, said it began since 2014 when he was the Agriculture and Agro-based Industry Minister.

“I launched the ‘jihad’ because we know the one who determined the price is the cartel, comprising the middlemen and so on.

“At that time,  I saw how difficult life was fishermen…how the risked their lives going, leaving their homes after the Isyak prayer to the sea in the dark night and then returned after dawn, while the middlemen waited by the beach for the catch brought in by the fishermen, but the ones who got more profit were not the fishermen.

“This is because the middlemen bought their (fishermen) catch at cheap price and consumers also lose because they had to buy at higher price,” he added.

New ceiling price for COVID-19 test kit to be known next...

EPF dividend should have been at 6.7 pct if no withdrawals...