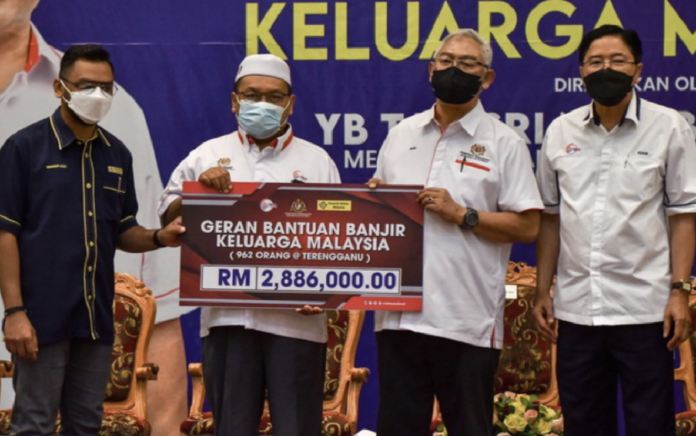 KUALA TERENGGANU, April 19 — The government will complete the distribution of Keluarga Malaysia Flood Aid (BBKM) before Hari Raya Aidilfitri to about 16,000 informal and micro entrepreneurs across the country who have been affected by the flood disaster.

Entrepreneur Development and Cooperatives Minister, Tan Sri Noh Omar said currently, there were about 1,300 entrepreneurs who had still not received the one-off aid of RM3,000 each and the payments would be made soon.

“The aid involving an allocation of RM50 million is managed by TEKUN (National Entrepreneur Group Economic Fund) with the cooperation of Amanah Ikhtiar Malaysia. It’s a one-off aid with no repayment required.”

He said this to reporters after handing out the BBKM to informal and micro entrepreneurs in Terengganu at the Taman Tamadun Islam Convention Centre, here, today, with 962 of them receiving a cheque for RM3,000 each.

Noh also said that he would be meeting the Malaysian Industrial Development Finance Bhd (MIDF) and SME Corporation Malaysia (SME Corp) officials tomorrow to seek clarification on the delay in giving aid under the SME Emergency Fund 2.0 to the small and medium entrepreneurs (SMEs) affected by the floods.

He said the ministry was informed that the interest-free loan of RM100,000 with a one-year moratorium involving an allocation of RM100 million had been approved for over 200 applicants but to date, the payments had not been made.

“I see that the dispensing of the SME loans is a bit slow. SME Corp is the one approving the loans but the payments are made by MIDF. This loan is (categorised) as emergency loan for the flood-affected entrepreneurs but I see that the conditions set, especially by MIDF, are the normal and not for an emergency loan.

“I had already called both (SME Corp and MIDF) and at the first meeting, they promised that the matter would be resolved within two weeks but this is already the third week and still unresolved.

“I also cannot blame them as they are giving the loans but I ask that they help ease the procedure for the people,” said Noh who also urged the SME associations to assist their flood-affected members in applying for this loan to SME Corp.

Immigration Dept collects RM3.5b in revenue as of Aug 30