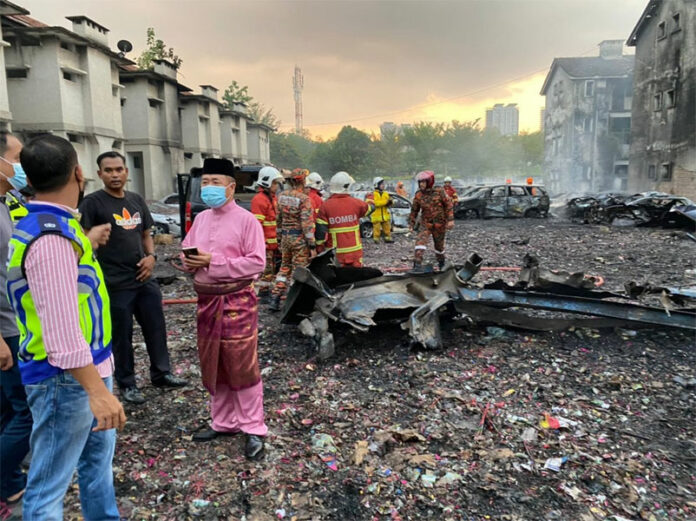 KUALA LUMPUR, April 26 — Three workers were injured while cleaning a firecracker and fireworks disposal site at the Case Item Store of Sentul district police headquarters (IPD) this afternoon when sparks apparently came from a garbage bin to ignite the contraband with explosions rattling the area.

Sentul police chief ACP Beh Eng Lai said in the incident at 6.15 pm, the three men from Sabah were hired to clean the disposal area for confiscated firecrackers and fireworks at 3 pm.

“While clearing the area, fire was reported to have suddenly ‘hopped’ from a RORO (Roll-On Roll-Off) rubbish bin used to store the waste before a series of explosions believed to be firecrackers went off.

“The three victims, aged 25 to 30, have received treatment as outpatients at the Kuala Lumpur Hospital,” he said when met by reporters at the scene today.

Commenting on the procedure used by police when disposing of case items (firecrackers and fireworks), Beh said it was done in accordance with standard operating procedures (SOPs).

“The disposal work has received approval from Kuala Lumpur 2nd Magistrate’s Court which allowed it to be disposed of according to the police SOP. The magistrate was also present to witness the disposal work which was completed at 4.30 pm this afternoon,” he said.

Beh said there was no (criminal) element of treachery in the incident and did not rule out the hot weather today as a factor which made it possible for sparks to occur before (the fireworks started) exploding and burning.

Meanwhile, the Kuala Lumpur Fire and Rescue Department in a statement tonight said that it received a fire report at 6.20 pm and deployed 60 firefighters and 10 fire brigades to the location at Jalan Perhentian here.

Meanwhile, a victim who only wanted to be known as Al Kasim, 30, said before the incident he was cleaning the rubbish pile at the store.

“Suddenly I heard sparks from an iron trash bin and followed by a loud explosion. I jumped away from the location of the explosion and sprained my leg and then exploding firecrackers landed on my back,” he told Bernama at the scene.

A witness who only wanted to be known as Sunjeet Kaur, 47, who was close to the scene said she was startled by some loud explosions.

“During the incident, I was buying food at a nearby bazaar. Then I saw thick smoke rising really high,” she said.

Today, police were disposing of 1,059 boxes and 35 sacks of firecrackers and fireworks of various types at the store.

The firecrackers and fireworks worth about RM4.1 million seized in March are believed to have been headed for the Aidilfitri market.

Compulsory for employers to advertise vacancies on MYFutureJobs portal – Minister...