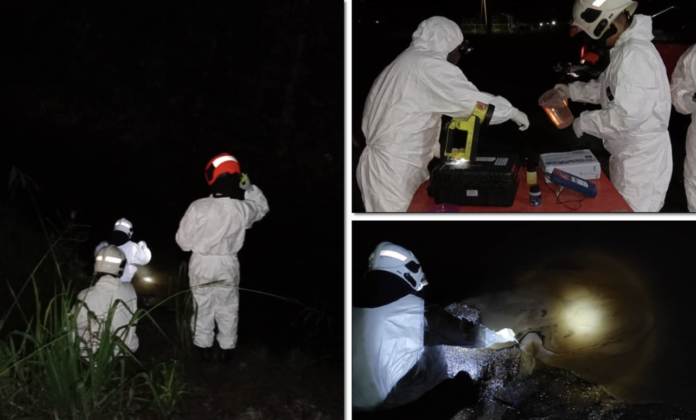 TUARAN, May 10 — Members of the public are advised to steer clear of the Sungai Rugading area here after a chemical spill was detected at the river yesterday evening.

Sabah Fire and Rescue Department (JBPM) assistant director (Operations) Misran Bisara said a hazmat detector had discovered the pollution, which was in the form of scheduled waste.

He said the Tuaran Fire and Rescue Station received an emergency call from MERS 999 at 6.34 pm before a team was dispatched to the scene, situated 10 kilometres away.

“Although the pH level of the river water is 6.8 or neutral, another occurrence of chemical spill can change the reading (to polluted). As such, we don’t declare it as safe today,” he said when contacted by Bernama.

Misran said today, JBPM and other agencies had monitored the area around Sungai Rugading with a radius of two kilometres, and the Sabah Department of Chemistry had taken water samples at two locations for analysis.

“In addition, the Sabah Department of Environment has installed three special equipment to block and reduce the pollution rates at three locations in Sungai Rugading,” he said.

Misran said those with information or who have witnessed the dumping of chemical waste into the river should lodge a report with the department concerned.

Tuaran is a district on the west coast of Sabah with an area of 1,166 sq km and is situated some 34 km north of Kota Kinabalu.

1,840 residents to get vaccinated under joint forces command’s CIMIC programme